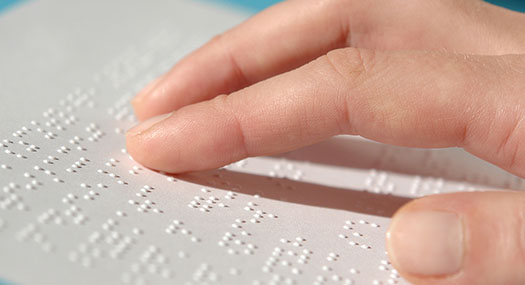 Braille is a system of raised dots that can be read with the fingers by people who are blind or who have low vision. Teachers, parents, and others who are not visually impaired ordinarily read braille with their eyes. Braille is not a language. Rather, it is a code by which many languages—such as English, Spanish, Arabic, Chinese, and dozens of others—may be written and read. Braille is used by thousands of people all over the world in their native languages, and provides a means of literacy for all.

Braille symbols are formed within units of space known as braille cells. A full braille cell consists of six raised dots arranged in two parallel rows each having three dots. The dot positions are identified by numbers from one through six. Sixty-four combinations are possible using one or more of these six dots. A single cell can be used to represent an alphabet letter, number, punctuation mark, or even a whole word. This braille alphabet and numbers page illustrates what a cell looks like and how each dot is numbered.

How Was Braille Invented?

Louis Braille was born in Coupvray, France, on January 4, 1809. He attended the National Institute for Blind Youth in Paris, France, as a student. At that time, books were created using raised print which was laborious to produce, hard to read, and difficult for individuals to write. While attending the Institute, Braille yearned for more books to read. He experimented with ways to create an alphabet that was easy to read with the fingertips. The writing system he invented, at age fifteen, evolved from the tactile "Ecriture Nocturne" (night writing) code invented by Charles Barbier for sending military messages that could be read on the battlefield at night, without light. Learn more about the creation of the braille code by exploring AFB's Louis Braille Online Museum.

How Is Braille Written?

The standard system used for reproducing most textbooks and publications is known as contracted braille. In this system cells are used individually or in combination with others to form a variety of contractions or whole words. For example, in uncontracted braille the phrase you like him requires twelve cell spaces. It would look like this:

If written in contracted braille, this same phrase would take only six cell spaces to write. This is because the letters y and l are also used for the whole words you and like respectively. Likewise, the word him is formed by combining the letters h and m. It would look like this:

There are 180 different letter contractions used in contracted braille (including 75 shortform words like "him" shown above, which are simple abbreviations). These "short cuts" are used to reduce the volume of paper needed for reproducing books in braille and to make the reading process easier. Most children learn contracted braille from kindergarten on, and contracted braille is considered the standard in the United States, used on signs in public places and in general reading material.

Just as printed matter can be produced with a paper and pencil, typewriter, or printer, braille can also be written in several ways. The braille equivalent of paper and pencil is the slate and stylus. This consists of a slate or template with evenly spaced depressions for the dots of braille cells, and a stylus for creating the individual braille dots. With paper placed in the slate, tactile dots are made by pushing the pointed end of the stylus into the paper over the depressions. The paper bulges on its reverse side forming dots. Because of they are inexpensive and portable, the slate and stylus are especially helpful for carrying to jot quick notes and for labeling such things as file folders.

Braille is also produced by a machine known as a braillewriter. Unlike a typewriter which has more than fifty keys, the braillewriter has only six keys, a space bar, a line spacer, and a backspace. The six main keys are numbered to correspond with the six dots of a braille cell. Because most braille symbols contain more than a single dot, combinations of the braillewriter keys can be pushed at the same time.

Technological developments in the computer industry have provided and continue to expand additional avenues of literacy for braille users. Software programs and portable electronic braille devices allow users to save and edit their writing, have it displayed back to them either verbally or tactually, and produce a hard copy via a desktop computer-driven braille embosser. Because the use of computers is so common in school, children learn both the braille contractions and also how to spell words out letter for letter so they can spell and write using a keyboard.

Since its development in France by Louis Braille in the latter part of the nineteenth century, braille has become not only an effective means of communication, but also an essential avenue for achieving and enhancing literacy for people who are blind or have significant vision loss. Braille is here to stay!