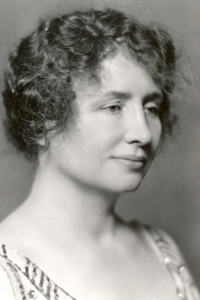 Helen Keller's improbable journey from a child unable to communicate due to her multiple disabilities, to her exalted place on the world stage as the famous global citizen she would become, is one of the greatest stories of the 20th century.

For many, Helen's story ends with the image of a young deafblind girl and her teacher Anne Sullivan at a water pump. However, that transforming moment for Helen signified only the beginning of her new life—a life dedicated to tireless advocacy and fearless activism that opened wide the doors of possibility for people with disabilities.

Helen Keller was a luminary who continues to transcend her historical era. Because she was a woman outspoken in her principles, she inspired changes in public attitudes about the capabilities of people with visual impairments. As she pushed for revolutionary changes in the law, people with disabilities were able to transition into mainstream education and employment. Helen Keller inspired future generations of people with disabilities to live life to the fullest.