An Evaluation of the Orion TI-84 Plus Talking Graphing Calculator

Over the past few years, the fields of science, technology, engineering, and mathematics (STEM) have become hot topics among people with vision loss. Being visually impaired, I was delighted when I discovered that the American Printing House for the Blind (APH) and Orbit Research had formed a partnership to create an accessible version of the TI-84 Plus graphing calculator by Texas Instruments. This article gives the lowdown about this exciting, innovative product.

The Orion TI-84 Plus Talking Graphing Calculator is almost an exact replica of the Texas Instruments TI-84 Plus graphing calculator used by sighted students, except the Orion has an additional "add-on" component consisting of11 additional keys located above the calculator's display screen. The keys on the Orion are fairly easy to distinguish by touch, with variation from convex to concave for quick recognition. For even more tactile discernment a nib could be added to the 5 key on the number pad. The background and text of the keys vary in color, including white, black, grey, blue, and green. Some of these background/text pairings result in a high contrast scheme, such as the black text used on the white keys of the number pad, but others (like the blue text used to designate the second functions of keys), are more difficult to see. The text size used for the keys ranges from 7- to 12- point. 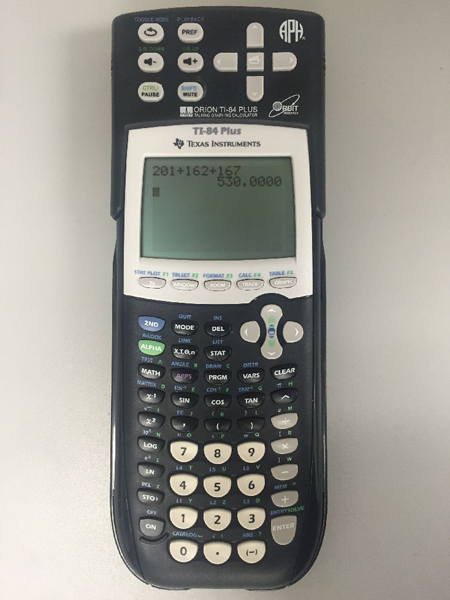 The Orion is 9.3 inches by 3.5 inches by 1 inch, and it weighs roughly twelve ounces. One quirky aspect is the device needs two power sources to be operational: the Orion's 11-key, "add-on" component's internal battery charges via an AC adapter, while the main portion uses four AA batteries. The calculator has one serial and two USB ports as well as an earphone jack. It has an LCD screen that is approximately 2.8 inches diagonally. While there is an option to change the contrast level of the screen (not much range here, though), the font size is fixed at approximately 12-point for calculations on the home screen and around 9-point for numbers along the XY axes of graphs. When purchased from APH, the Orion costs $599.00, which includes the calculator and its protective cover, batteries, USB cable, earphones, and user manuals.

The Orion uses the synthetic text-to-speech (TTS) FonixTalk software from SpeechFX. Its quality is comparable to that found with the JAWS screen reader, with clarity similar to the JAWS default eloquence speech engine. There are options to mute; pause; change the volume, rate, and pitch of speech; and select different voices (male, female, young male child, young female child). You can navigate any of the text that's displayed on the screen by character, move to the beginning or end of a line, move up or down a line, or have all the lines read aloud. A peculiar aspect of the Orion is that the device has two arrow keypads, one located on the "add-on" component and one for the main portion of the calculator that often perform different functions. For example, when in the y=x pre-graph screen, the "add-on's" arrow keypad moves through the text of the equation you have typed, whereas the arrow keypad located on the main portion of the calculator allows you to move away from this text to change equation settings. One minor drawback of the audio is the limitations of the volume adjustment; its lowest setting is still fairly loud. Also, it would be useful if the volume were adjustable in smaller increments.

The state-of-the-art feature, of course, is the ability of the Orion TI-84 to convert the visual aspects of a graph into alternate mediums, one being audio, which is accomplished through the use of either speech or tones. While there are different screens for displaying a graph, the trace screen will be most often viewed by users with visual impairments because it allows you to navigate point by point on a scatterplot or along a line. When on the trace screen, you use the main portion's left and right arrow keys to move from point to point. If you are in speech mode, each press of an arrow will announce the point's coordinates, e.g., "x=4.1000, y=0.1234." If you are in tone mode, each press of the left or right arrow key produces tones of varying pitch as well as the absence or presence of "static," where the calculator both vibrates and emits noise. In tone mode, you can also have alerts played when the cursor crosses the X or Y axis. (In the Orion's settings menu, you can change the duration of tones, toggle X or Y axis crossing indicators, and toggle crossing gridlines indicators.) So basically, a tone tracing of a graph is where the cursor begins at the leftmost point and moves across the graph to the right, with the pitch of the tone indicating the vertical location of the cursor on the Y axis, and with static/vibration designating the cursor's position relative to the X axis.

Besides replication through audio, it is possible to produce print, tactile, or electronic representations of a graph, but you must first purchase the TI Connectivity Graph Link serial-to-USB cable in order to interface with a computer. Then, you have to download and install the free TI Connect software, which is accessible with screen reading or magnification. At that point, you can create and edit graphs on the calculator, connect to the computer, and open images of the graphs using Microsoft Paint or a similar program. Obviously, your embosser must be able to create tactile graphs and must be able to convert .BMP files.

An extremely important note: this calculator is most suitable to those who have a strong background in math, at least algebra 2 or pre-calculus. Also, there is a learning curve when it comes to interpreting graphs. Indeed, it is beneficial if you are already familiar with the visual characteristics that certain equations will inevitably produce when represented graphically—such as overall shape, number of times a given graph would cross the X or Y axis, and in which quadrant(s) a given graph would be located—in order to facilitate forming a mental picture as the cursor traces. For example, if you desire to find the zeros of a parabola that crosses the X axis twice, you must find each one individually; the calculator does not allow for their automatic, simultaneous display. Instead, you would have to enter the equation, hit the key to graph it, then go to the menu and select "intersection," which puts your cursor on a point. Then you would start highlighting the portion containing one of the parabola's crossings of the X axis by first moving the cursor left past the intersection, hitting the Enter key to reverse directions, then moving right to pass the intersection once again in order to locate the point in the middle of the screen, and then hit Enter again to hear the coordinates of this zero. Next, you would repeat this series of steps to find the second zero. For those new to graphing, I would surmise that it would be advantageous to study large print or tactile versions of graphs before progressing to the calculator.

Documentation and Getting Help

The Orion TI-84 ships with a quick start guide in braille and large (14-point) print as well as a USB thumb drive containing the full user guide and other information about the calculator, such as links to audio podcasts, the standard user manual for the TI-84 Plus, and examples of solving equations and creating graphs. This information can also be found on the APH website. One drawback is that you must view two manuals to learn about the calculator—one covers the standard TI-84 Plus calculator and the other covers the additional functions of the Orion "add-on" component. It would be more convenient if the information was combined and if the guide included more in-depth, step-by-step instructions for creating, navigating, and analyzing graphs.

A most state-of-the art and valuable feature is the calculator's powerful built-in help system. When you turn the calculator on, it's announced that "pressing the second key three times activates Help, and pressing three times again returns to normal operational mode." To get acquainted with the large keypad (around 45 keys along with their second functions), it is essential to use Help to assist in memorizing the layout and placement of keys. Once you activate Help, you just have to press a key to hear its name and description. Hit the second-function or alpha key and the former to hear its other use. Another novel, vital feature, which I used constantly, is screen sensitivity, which you can activate and deactivate on the fly. For example, when I had forgotten the location of the cosine and parenthesis keys as I was halfway through entering a long trigonometric equation, I activated Help in order to discover their whereabouts, and then I deactivated Help to resume typing.

I'm glad to see that APH and Orbit chose to adapt a mainstream product as opposed to creating a calculator "for the blind." This approach makes it easier for visually impaired students and employees to collaborate with their sighted counterparts, since they're all using the same technology. The popularity of the TI-84 also means that more tech support is available. I must also point out that I'm pleased to see the increase in interest in developing educational technology for people with vision loss who are planning to attend or are attending college or are of employment age. In the past, it seemed the trend was geared toward creating fun, creative products solely for preschool and elementary school age children, while neglecting other demographics. The Orion TI-84 Plus Talking Graphing Calculator absolutely broadens opportunities for people of all ages working in a variety of settings, from a high-school student learning about the unit circle to a NASA engineer researching the trajectory of a rocket.