If you have ever read a book or attended a seminar focused on finding a path to employment, chances are more than good that the toolkit for success included an urge to become a volunteer. If you have ever participated in or read the results of a survey seeking to identify the most pressing obstacles on that path to employment for people with disabilities, chances are also far more than good that you heard or read the word "transportation."

Ron Brooks was working on a master’s degree in international relations at San Francisco State when the opportunity arose to serve on an advisory board to tell the Bay Area Rapid Transit (BART) system how they might do a better job serving people with disabilities. You might say he leapt in the air with both hands raised, so eager was he to help make the transportation situation better for him and other Bay area residents. His chance to complain led to a chance to help shape an improved Bay area transportation solution. More importantly, his volunteering led to a paying job that would launch a career. For more than a quarter century, Ron Brooks has worked in transit and paratransit. His career progression enabled him to make a difference in the transportation spheres in San Francisco, Florida, Arizona and, most recently, on a national level in his new role as vice president of transit market development for American Logistics.

For him, the career move was prompted in part by his tandem intrinsic awareness of how transit and paratransit could do more in the 21st century than it did 30 years ago, and of how vital dependable transportation is for people with disabilities.

Due to congenital glaucoma, Ron Brooks had poor vision all his life. For a few elementary school years, he attended a residential school for the blind. Most years, he attended public school in Indiana and Kentucky. His vision was adequate for reading large print, drawing, riding a bike, and playing sports. During a game when he was 14, an errant basketball struck him in the head. and changed his low vision status to blind. For a while following the trauma, he received home instruction. He learned to read and write braille and to use a white cane. New skills in place, he returned to public school and has been moving forward ever since.

Volunteering has always been a key ingredient for Brooks. He was involved with the California Council of the Blind while in graduate school, which led to his involvement with BART. As a blind person, he knew the difficulties of depending on public transportation and, initially, saw a chance to serve on an advisory board as an opportunity to make San Francisco transportation friendlier. That role, as an advisory group member, enabled him to build relationships with BART staff and when a job opened, he was ready to apply.

The public misconceptions about blindness are such, Ron believes, that it is essential for a blind person to be better qualified, more motivated, and eager to take on any available task in order to be hired. That principle, along with plenty of ability and drive, has served him well at each personal and professional turn.

For the 13 years prior to his joining American Logistics as vice president of transit market development, Brooks was a dynamic leader with Valley Metro, the transit system in Phoenix, Arizona. He managed services for light rail, dial-a-ride, and more. “There are 600 transit agencies,” he explains “and every one of them is different.” All are locally funded with some money from the Federal government. In recent years, there has been an increased focus on maintaining those riders the industry calls “Choice.”

Choice riders are those seniors and people with disabilities who use paratransit and general public transit and who have jobs and active lifestyles. “They work. They vote. They speak up,” Brooks says, and it makes good economic sense to keep them as customers. “The transportation landscape is changing,” he says, with Lyft, Uber, scooters, electric bikes, and more. Retaining those choice ridersthose who choose to, rather than must, use a particular transit optionrequires innovation.

Valley Metro, as well as other agencies around the country began incorporating other services into the paratransit model. Customers there can now call for a ride 24/7, get a ride within minutes or hours rather than days, and have a range of transportation options. Brooks was part of making that happen.

Brooks embraced the opportunity with American Logistics, he says, because it affords a larger stage for the same sorts of improvements he drove in Phoenix.

He and his family still live in Phoenix, but he travels about once a month to the American Logistics office in San Clemente, California. His overall schedule involves a travel agenda that claims 60 to 70 percent of his timetraveling to make presentations at conferences, proposals to transportation agencies, and otherwise building development opportunities and relationships. He meets with people on the phone, via webcasts, and in person. He writes proposals, makes presentations, and attends meetings.

Although he is currently between guide dogs, he has had dogs from the Seeing Eye for decades. At present, he and his white cane travel to cities around the country developing business for American Logistics. His primary tools are a laptop with JAWS, an iPhone, a braille embosser, his white cane, and AIRA. He prefers hardcopy paper notes in braille to a refreshable braille display and typically has such notes while presenting. A clicker in one hand to control the laptop and braille pages in the other is his own description of his presentation style.

He uses AIRA to obtain information from sighted assistants when he is in an unfamiliar hotel or airport, for indoor and outdoor navigation, as well as for tasks like assembling expense receipts for submission or identifying a captcha on a necessary website.

Despite a demanding schedule as a respected thought leader in the transportation arena, Ron Brooks has also managed to create a wonderfully full life outside the office. He and his wife, Lisa, who is also blind, have three children, now ages 14 to 17, who all happen to be sighted and who have typically full and active lives. He proudly points out that all three were born at home, with the assistance of a midwife, stressing that it is important to make others aware of the full-featured nature and "normalcy" of a life that might include blindness. When not working, he enjoys cooking, swimming, hanging with his kids, and playing the saxophone.

For those who are not yet employed or who are not happily employed, Brooks's advice is clear. Volunteer. Build relationships. Be willing to do anything that is within your realm of capabilities.

All too often, he believes, blind people are taught to wait and be patient, to be grateful. Gratitude won’t get you a job. You need to be the person who will do anything, who is willing to try. Take risks.

“As a blind person,” he concludes, “I need to be better qualified, better connected, and better able to do the job. … Computers don’t make hiring decisions. People do.” 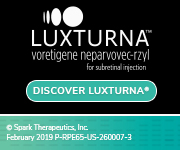 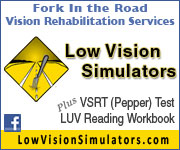 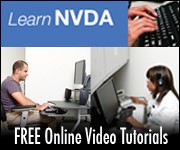