Cell Phones, Tablets, and Other Mobile Technology for Users with Visual Impairments 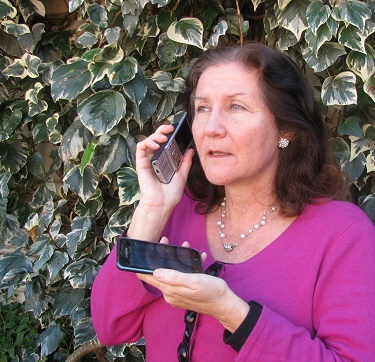 If you've ever watched an episode of Star Trek, you will doubtless recall how the crew of the Starship Enterprise was able to keep in touch with each other by means of a small device, called a communicator, attached to their uniforms, and to access data and a galaxy of other information via hand-held tricorders. In the 60s, 70s, and 80s, this was far-in-the-future, pipedream, science-fiction stuff. But in the early 90s, science fiction started becoming reality with the introduction of mobile phones. By the early 2000s, we regularly communicated on the go using Short Message Service (SMS) text messages, and soon e-mail and Web browsing capabilities were added to our cell phones, which we dubbed "smartphones."

Over the past several years the number of smartphone users has exploded. The capabilities of these devices have doubled and redoubled, so that today we can carry a device in our pocket that has more processing power and memory storage than that possessed by the world's fastest supercomputers of just a few decades ago. Today you can check your e-mail, the weather forecast, or a stock quote on your mobile device. Want to know which movie won the Oscar for Best Picture in 1973? Speak to your smartphone and ask the question, from anywhere, and in a second or so you'll have the answer: The Sting, starring Paul Newman and Robert Redford. Want to watch it? Use your smartphone to log onto Netflix, Amazon Instant Video, or another online video streaming service and you can watch it right on your phone. You could also choose to view The Sting on a touch tablet like the iPad, which includes most of the capabilities and features of a smartphone with a larger display.

If you've used a smartphone these past several years, you already know that a great deal of voice command capabilities come built in to most current models, so you can verbally instruct your smartphone to "Call my wife," or "Read my last text message." In addition, the three major smartphone platforms—Apple iOS, Google Android, and Microsoft Windows Phone—all include built-in screen readers similar to those that allow you to use your PC or Mac computer with little or even no vision. So, now you can read a webpage, compose an e-mail, or use your phone's GPS function to help you find the nearest coffee shop.

Most smartphones have replaced a majority of their physical buttons and other controls with visual icons that appear on a smooth glass touchscreen. You use a finger to select and activate these icons, and to enter phone numbers, messages, and other text via visual representations of keyboards and number pads. At first glance, so to speak, a touchscreen would appear to present insurmountable difficulties for those with visual impairments. You may be saying to yourself, "On my home phone I can still feel my way across, up, and down the keypad to dial a number. How can I find the right number on a flat piece of glass?"

This guide will show you exactly how this is possible. By the time you finish, you will feel empowered to use your smartphone in new ways or to purchase your first smartphone and enjoy a world of data and communications you can carry with you everywhere.

First we'll take a look at some new technology for an old friend—that trusty clamshell or candy-bar style feature phone.

Using a Feature Phone with a Visual Impairment or Blindness

Some of us want a mobile phone to function primarily as a phone, giving us the ability to simply make or answer calls on the go. Some people may not be able to, or may not want to, afford the extra cost of a wireless data connection, which nearly all mobile phone companies insist upon in order to use any smartphone model. It is still possible to get a simple phone that will make and receive phone calls without all of the bells and whistles associated with a smartphone. These types of devices are called feature phones, and usually offer the ability to make and receive phone calls and send and receive SMS text messages. Most feature phones come in one of two configurations:

Many feature phones include at least some accessibility controls designed to accommodate the needs of those with visual impairments. For some manufacturers these accommodations are limited to raised dots placed on the 5 number key to help orient your fingers on the keypad, and perhaps a few rudimentary voice commands such as "Call home" or "What time is it?"

At the time of this guide's publication, three feature phones stood out for their accessibility.

Offered by Sprint/T-Mobile, the Kona flip phone is also available either with or without a contract. Read a review of the Kyocera Kona in AFB AccessWorld.

Offered by Sprint/T-Mobile, the Verve candy-bar style phone is also available either with or without a contract. The Verve offers a slide out keyboard for those who wish to text frequently with accessibility. Read a review of the Kyocera Verve in AFB AccessWorld.

The Odin VI from Odin Mobile, a third-party cell provider that specializes in serving those with visual impairments, is a candy-bar style phone with a slide-out keypad. Read a review of the Odin VI in AFB AccessWorld.

Each of the three phones mentioned above includes a voice guide that can be turned on via the phone's Settings menu. You will likely need sighted help for the initial setup, but after that the phone will speak every time you turn it on.

At first you may find the voice a bit mechanical and difficult to understand. Fear not. You can adjust the speed of the voice and its tone, and after a short time you will grow so accustomed to the speech, you will likely decide to increase its speed.

The full-featured voice guides in these phones will read your text messages and allow you to compose and send outgoing messages.

Because the world is moving toward smartphones with always-on data connections, as accessible as the accessible feature phones mentioned above are, it is likely that they represent the end of the line. Even if you decide that a feature phone will suit your needs completely, we encourage you to read on. When you learn what's possible, you may decide that you are ready, willing, and—most exciting of all—able to take the plunge and begin using a touchscreen smartphone or tablet.