Visually impaired students at the New York Institute for Special Education celebrated the launch of the Helen Keller Archive with a pizza party and cake in honor of Keller's forthcoming 138th birthday. The following video clip is from a feature on the Bronx—News 12. A transcript to the video is provided below. 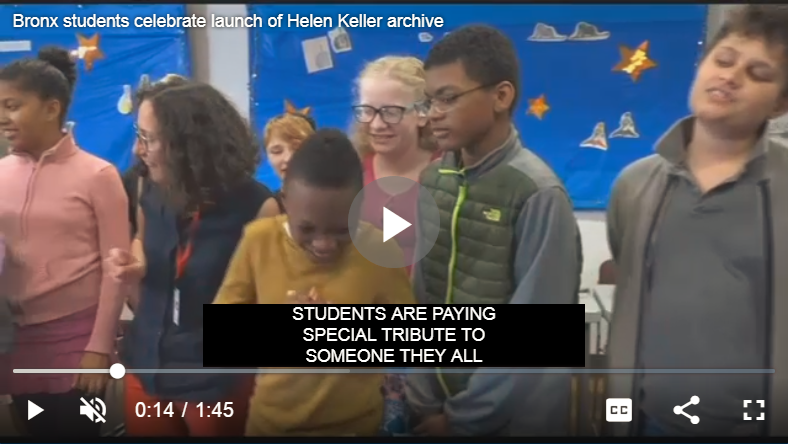 Jessica Cunnington: An American icon is now the inspiration for a new groundbreaking research system. Students in the borough are getting the chance to honor her.

Kristie Reeter: News 12 Nightside's Melissa Rose Cooper talks to them about what this means.

Melissa Rose Cooper: These visually impaired students are paying special tribute to someone they all admire.

Nestor (NYISE student): To me, she was a person who was able to do a bunch of things that blind and deaf people could not do back then.

Melissa Rose Cooper: They're celebrating the launch of the Helen Keller Archive at the New York Institute for Special Education just in time for what would have been Keller's 138th birthday.

Helen Selsdon (AFB Archivist): The Helen Keller Archive contains thousands upon thousands of items belonging to and about Helen Keller.

Melissa Rose Cooper: The archive is the first fully accessible digital research collection in the world and can be used by anyone regardless of sight or hearing limitations.

Helen Selsdon: Helen Keller is an American icon and she, above all, would want it so that people who cannot see and hear can access her history. The history of those with disabilities. It's sort of perfect that the prototype for accessible archives should be her archives.

Melissa Rose Cooper: Students also say having the digital archive gives people a chance to see them beyond their disabilities. Student Wani says he wants to be a singer and is excited to learn more about Sophie Tucker, a Ukranian born performer who was friends with Keller.

Wani (NYISE student): There's so many people that you'll want to learn about.

Helen Selsdon: I want the students to learn that you have to work extremely hard to change things and to make things better, but it can be done. Helen did it and they can, too.

AFB in the News