Workplace Technology: Working with IT Staff

"At first, [working with IT staff] was a little difficult because they were not understanding [of my] needs and were going off of the basic requirements for the ZoomText program, not considering how basic requirements were not designed for the workplace and large data systems. Then I had one IT person who took initiative to do more research on the program and even called the company to learn more. That person became my primary point of contact anytime I had issues because I knew he understood, and I didn’t have to explain over and over." —White female in her 30s who became visually impaired in childhood 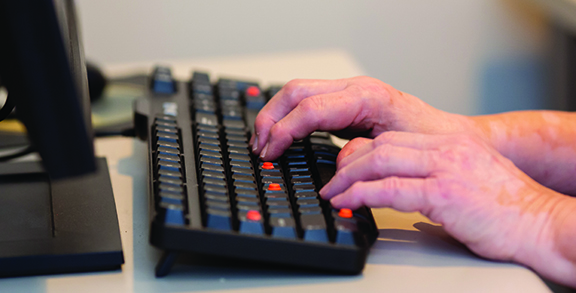 Of 300 participants, 225 (75.0%) reported that their employer hired IT staff. There were 210 (84.3%) of 249 participants who reported they had interactions with the IT staff. Figure 5 shows participants’ response to the question about IT staff knowledge about accommodations used by employees.

Participants were asked to select their level of agreement with the statement: The IT staff hired by my employer or contract are knowledgeable about accommodations used by employees with disabilities. Of the 206 participants who responded, 106 (51.5%) agreed or strongly agreed with this statement, indicating that just over half reported the IT staff had knowledge about the accommodation needs of those who are visually impaired.

Recognizing that there are times when IT staff are not able to support employees with their accommodation needs, participants were asked to select all the things that typically occurred in this situation. There were 196 participants who reported that:

"I have tried to explain how I need access to a screen reader to complete all word processing and work with forms; however, the IT staff had no idea how to help, install the software, and sometimes didn’t even show up when an appointment has been made to work with them!" —White female in her 60s who became visually impaired in childhood

There were few participants who reported in the interviews that IT staff had knowledge about AT. Most participants reported it was their own responsibility to figure out how AT could support them in their work tasks. There were a few participants who reported that when they explained to IT staff what they needed, the IT staff would allow them to make changes to the equipment or, in some cases, give them administrative privileges. It was rare that IT staff took time to research accommodation needs. Figure 6 shows participants’ responses to a question about IT staff knowledge about employee’s specific accommodation needs.

"The IT guys where I work are very open to learning new things. ZoomText scares them a bit, but they always keep trying to figure out how to fix what needs to be [fixed]. They ask questions when they need to, and they are not afraid to say when they don’t know. They make phone calls on my behalf all the time to get workarounds, so I have what I need." —White female in her 50s who is congenitally visually impaired

Some participants who were interviewed gave specific examples of how, over time, IT staff and the participant worked together, so both became more knowledgeable about mainstream technology and AT. In the end, this collaboration was mutually beneficial to all.