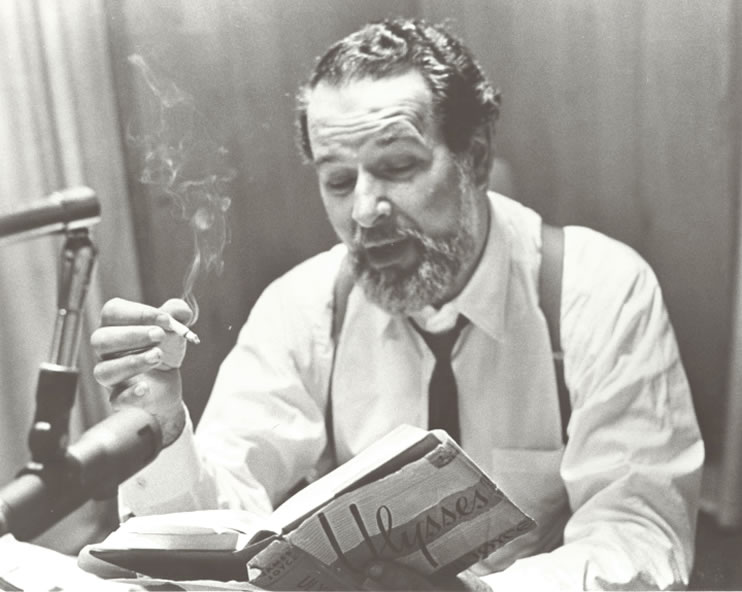 Talking Book narrator Alexander Scourby is seen from the waist up, sitting in a recording studio narrating Ulysses by James Joyce. He holds a lit cigarette in his right hand and the open book in his left. Photograph circa 1970s. Talking Book Archives, American Foundation for the Blind.

Over the years many famous men and women have recorded Talking Books at the American Foundation for the Blind. Politicians, actors, philosophers, and novelists have recorded their own work as well as the work of others. One of AFB's most prolific and best-loved narrators was the actor Alexander Scourby [1913 - 1985]. Scourby recorded more than 800 titles from the late 1930s until 1985, including the Bible and War and Peace, as well as bulletins from Europe on behalf of the American Foundation for Overseas Blind (AFOB), now Helen Keller International.

In 1986 AFB created the Alexander Scourby Awards to recognize excellence in the field of Talking Book narration. Scourby thought his work with Talking Books was some of the most important of his career:

... the work in my life, with almost no exception, that has given me the greatest gratification has been what I've done at the Foundation for the Blind in New York reading talking books.

... To compare a letter that one gets from the Foundation for the Blind, from some blind persons in California, or the State of Washington, or Minnesota with the letter that you'll get from somebody who saw you on [a] TV show the other day is really to see night and day. One moves you, touches you tremendously and the other is "gee, I think you are a great actor, will you send me a picture?" that sort of thing. There are exceptions, of course, but the mail that one gets from the readers of the talking books all over the United States is perhaps the most satisfying mail that any actor can get ...

Each thumbnail in this gallery represents a different narrator who has recorded at AFB. Click on the thumbnail to view images, and to bring up a list of titles that narrators have recorded. Many narrators recorded far more titles than are listed here.

Select to listen to audio: MP3 Audio of Psalm 23

The LORD is my shepherd; I shall not want.

He maketh me to lie down in green pastures: he leadeth me beside the still waters.

He restoreth my soul: he leadeth me in the paths of righteousness for his name's sake.

Yea, though I walk through the valley of the shadow of death, I will fear no evil: for thou art with me; thy rod and thy staff they comfort me.

Thou preparest a table before me in the presence of mine enemies: thou anointest my head with oil; my cup runneth over.

Surely goodness and mercy shall follow me all the days of my life: and I will dwell in the house of the LORD forever.