Pratt-Smoot Act: That All May Read 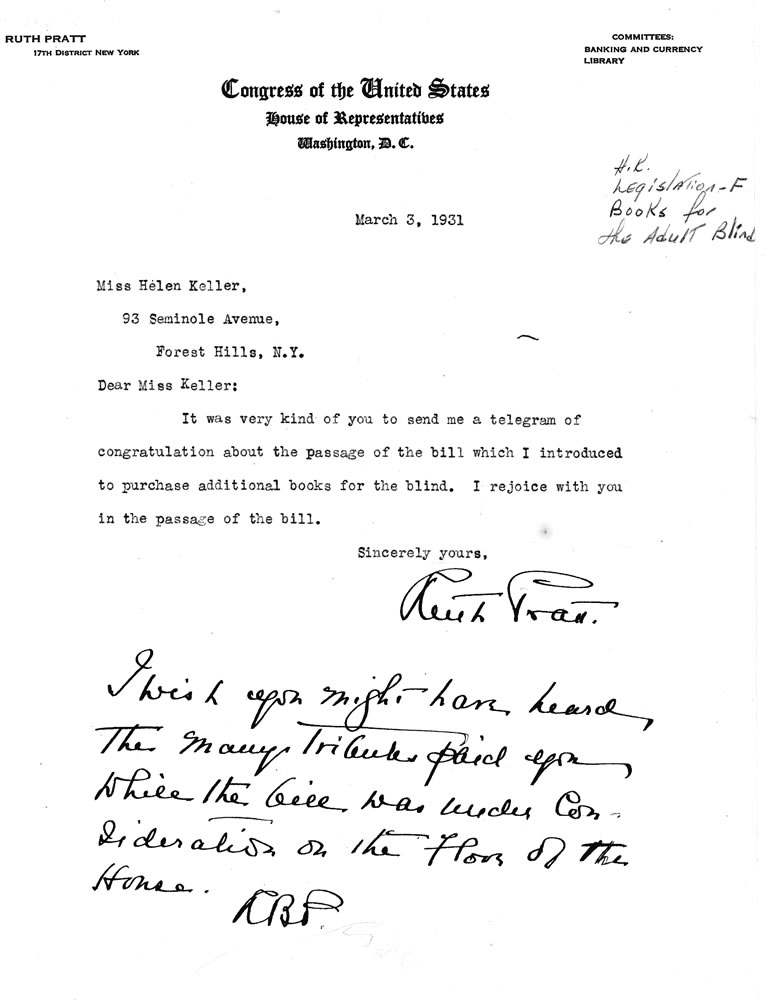 Letter from U.S. Congresswoman Ruth Pratt in Washington D.C. to Helen Keller in Forest Hills, New York, thanking her for a telegram congratulating her on the passage of an appropriation bill for Talking Books. The letter includes an annotation telling Keller about the compliments that were paid her in Congress, March 3, 1931. Helen Keller Archives, American Foundation for the Blind.

In 1930, congressional representatives Ruth Baker Pratt and Reed Smoot introduced a bill requesting funds to produce books for adults who were blind. The Library of Congress would administer the project. AFB lobbied in support of this bill, and Helen Keller, employed by AFB, spoke to the House of Representatives in Washington D.C. on March 27, 1930:

... Books are the eyes of the blind. They reveal to us the glories of the light-filled world, they keep us in touch with what people are thinking and doing, they help us to forget our limitations. With our hands plunged into an interesting book, we feel independent and happy.

... What you would not give to be able to read again! Wouldn't you give anything in the world for something to make you forget your misfortune for one hour? This bill affords you an opportunity to bestow this consolation upon thousands of blind men and women in the United States ...

[Transcriber's Note: The following appears printed on the left-hand margin of the stationery:

[The following appears printed on the right-hand margin of the stationery:]

[The following is printed center on the stationery:]

Congress of the United States
House of Representatives
Washington, D.C.]

[Transcriber's Note: The following is handwritten on the right-hand margin:]

[Transcriber's Note: The following is handwritten beneath the signature:]

I wish you might have heard the many tributes paid you while the bill was under consideration on the floor of the House. RBP]