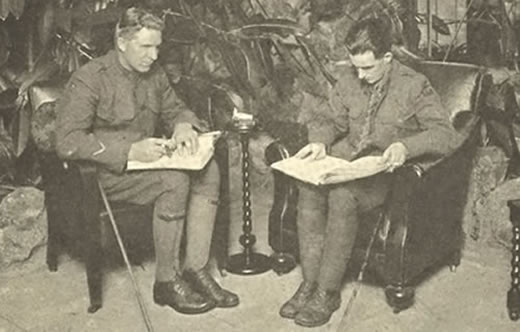 Soldiers blinded in World War I reading brailled literature supplied by the Library of Congress and distributed to veterans by Evergreen, a Red Cross Institute for the Blind in Baltimore, Maryland, 1920.
Evergreen Review, Volume 1, Number 9, September 1920. Reproduced in Outlook for the Blind, Fall & Winter, Volume XIV, Numbers 3 & 4, 1920.

When the American Foundation for the Blind (AFB) was founded in 1921, one of its key missions was to advocate for education and access to information for Americans with visual impairments. One of AFB's first tasks was to promote a uniform braille standard in an effort to more effectively provide books to Americans who were blind.

The need for books for blind individuals drew even greater attention after World War I when war-blinded soldiers returned home and the numbers of Americans with visual impairments grew. However, by 1921 only a very small portion of war veterans and the general public had mastered braille well enough to read braille books. Of those who could read braille, few were using library facilities, whose stocks of braille literature were inadequate. Talking Books proved to be a crucial step in providing access to literature and information to greater numbers of visually impaired individuals.