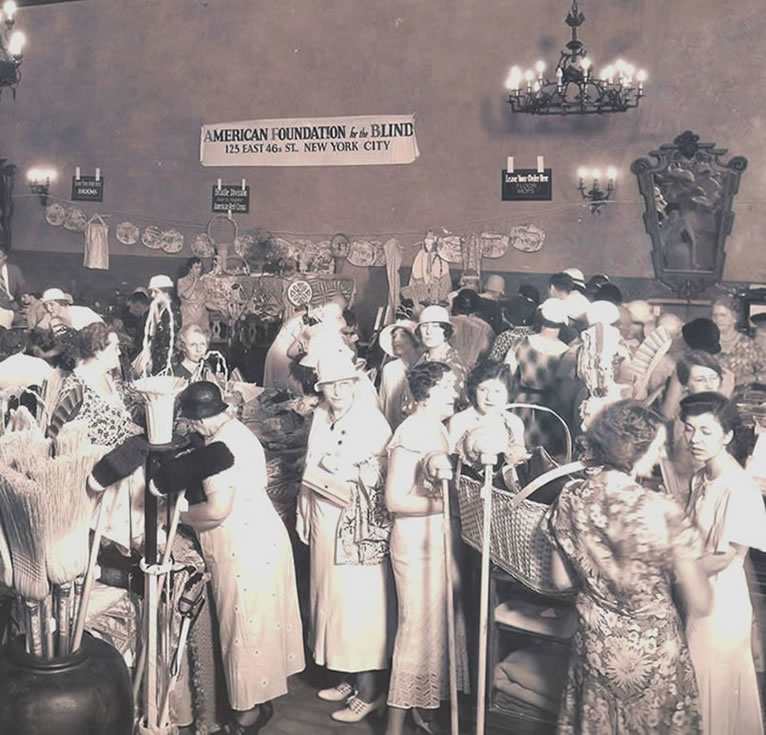 Miami's First Educational Week for the Blind. Women in shin-length dresses mill around in a large hall where products made by blind workers are on display. Items include mops, brooms, a cradle, and sewn objects. A banner advertising the AFB-sponsored event is visible on the back wall, March 12, 1933. Verne O. Williams, photographer. American Foundation for the Blind Archives.

The story of Talking Books and Helen Keller is an interesting one. Keller was initially opposed to the Talking Book program, but she was ultimately crucial to its successful outcome.

In 1924, Keller and her teacher Anne Sullivan Macy were hired by the American Foundation for the Blind to raise money for the organization's work on behalf of people who are blind and visually impaired. Her contribution was primarily in the form of the Helen Keller Endowment Fund, which raised funds through her speaking engagements and tours around the country. Keller was a proponent of education and strongly believed in providing people who are blind and visually impaired with the tools to educate themselves—as she had done so successfully for herself.

In 1935, when AFB began its concerted effort to find funding for the manufacture of Talking Book records, Helen opposed the endeavor. She wrote the following to a personal friend, Walter G. Holmes, at the Matilda Ziegler Magazine in February 1935:

... I was not in sympathy with a movement which would detract from the completion of the Endowment Fund.

Furthermore, I told them [AFB] I thought the blind could live without talking-books and radios at a time when millions of people are out of work and in the bread-line. Last winter in Pennsylvania alone five hundred blind people ate the bread of charity! Will radios and talking-books take the place of food, shelter and clothing? Naturally I am not willing to divert the attention of the public to talking-books while more urgent needs of the sightless demand first service.

Helen also singled out the World Conference for the Blind in 1931 and the new braillewriter as other examples of wasteful efforts, and instead voiced support for deaf-blind initiatives and programs that she saw as practical, such as the Educational Weeks for the Blind (a photograph of which is displayed on this page):

... they are one of our activities that actually reach the blind themselves and place them in the way of solving the problems of daily life. They are not as showy as talking-books, but they yield a rich crop of genuine service and happiness.