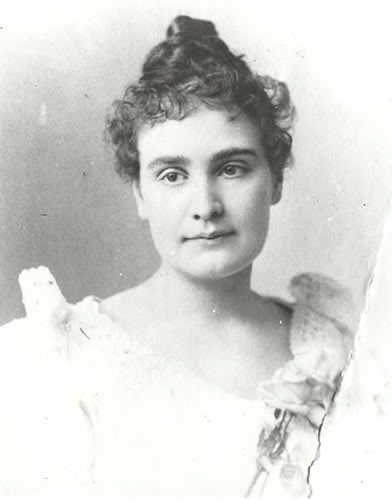 Head and shoulders portrait of Anne Sullivan, circa 1894. In this image, Anne faces the camera with a slight smile. Her head is tilted a little to her right. A long thick braid of hair appears to be curled at the top of her head and curly wisps of hair frame her face. Her light-colored dress has a wide neck with lace edging. A rose is pinned to her gown.

Anne Sullivan Macy (1866-1936) was a woman whose brilliance, passion, and tenacity enabled her to overcome a traumatic past. She became a model for others disadvantaged by their physical bodies, as well as by gender or class.

Anne was a pioneer in the field of education. Her work with Helen Keller became the blueprint for education of children who were blind, deaf-blind, or visually impaired that still continues today. Samuel L. Clemens (Mark Twain) dubbed her a "miracle worker." However, Anne's personal story remains relatively unknown. Although some of her letters still exist, it is primarily through the eyes of others that we know her. Sometime after she married John Albert Macy in 1905, the young wife burned her private journals for fear of what her husband might think of her if he should read them. Similarly, she did not want her correspondence to be kept after her death. But for historical purposes, materials were retained, and the American Foundation for the Blind's Helen Keller Archive contains some of her letters, prose, and verse. Other materials about Anne are located at the Perkins School for the Blind in Watertown, Massachusetts, and the American Antiquarian Society in Worcester, Massachusetts.

This website wishes to show Anne Sullivan Macy through her own words as well as through the eyes of others as the remarkable woman whose life and teaching philosophy remain an inspiration to those who educate children who are visually impaired. In 2003, Anne Sullivan Macy was inducted into the National Women's Hall of Fame and the American Foundation for the Blind was privileged to receive a medal in her honor.

By nature she was a conceiver, a trail-blazer, a pilgrim of life's wholeness. So day by day, month after month, year in and year out, she labored to provide me with a diction and a voice sufficient for my service to the blind.
—Helen Keller, writing about Anne Sullivan

Next » 200 Years: The Life and Legacy of Louis Braille
Share