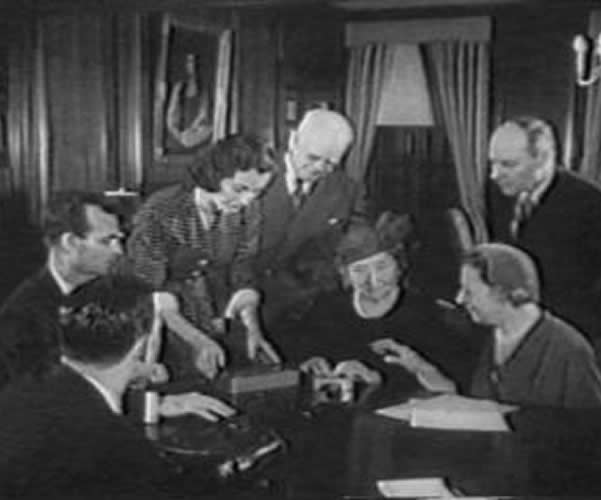 In this image, which is from a film, Helen is seated in a wood-paneled meeting room, testing a communications device for the American Foundation for the Blind. She has on a plain, dark dress and hat with many feathers. To her left is Polly Thompson, who has her hand on Helen's arm and may be in the middle of signing a message. On Helen's right is M. Robert Barnett, Executive Director of AFB. Four other people, three men and one woman, are also in the room, watching Helen carefully.

In 1924, Helen joined the American Foundation for the Blind (AFB), the country's leading advocate for people who are blind or visually impaired. For the next 44 years, she was an ambassador for AFB. She toured the United States, developing support for programs that help blind people. 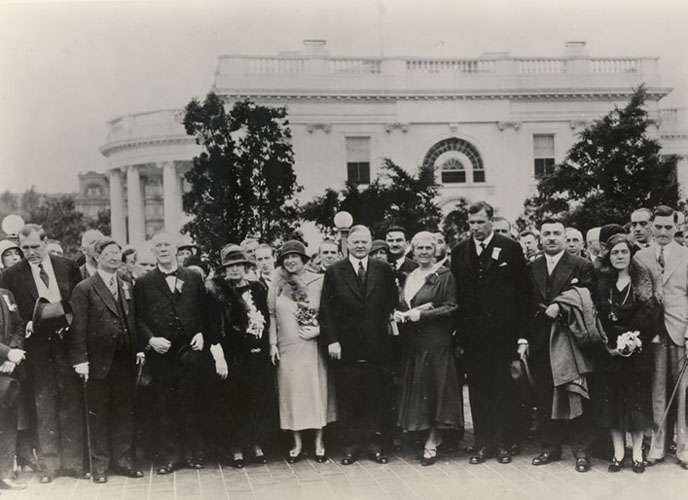 This crowd scene, just outside the White House, has Helen, Anne, and Herbert and Mrs. Hoover (the President and the First Lady), all in the front row! The picture was taken in 1931 during an international conference of workers for the blind, which Helen helped organize. Also front and near-center is Robert B. Irwin, Executive Director of AFB.

In 1932, Helen and two leaders from the American Foundation for the Blind—M. C. Migel and Robert B. Irwin—persuaded the U.S. government to hold an international conference of workers for the blind. Thirty-two countries sent their representatives to Washington, D.C., for a special meeting at the White House. Not only did President Herbert Hoover greet the delegates, so did Helen! She held a reception for them and attended all of the meetings. 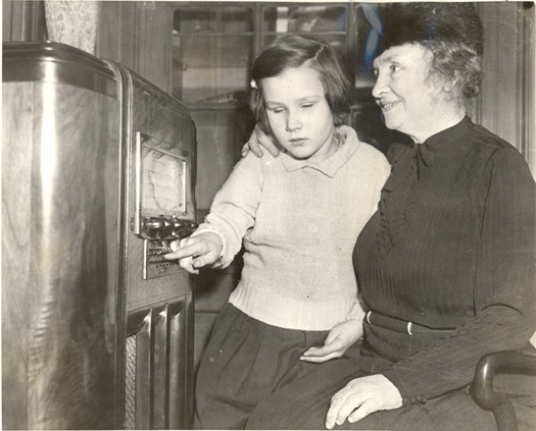 Helen is showing Lillian Switzer, a ten year-old blind student, how to use a huge radio that has Braille symbols. The radio is almost as tall as Lillian! Helen is sitting down, with her right arm around Lillian's shoulders. She is wearing a dark ribbed shirt and skirt and a small dark hat with feathers. Lillian is operating the radio, wearing a light sweater and dark pleated skirt. The picture was taken in 1938, in the Helen Keller Room of AFB's old offices on 16th Street.

Helen also convinced a major radio manufacturer to donate 250 radios to people who were blind or visually impaired. This was part of a 1929 AFB campaign that distributed over 3,750 radios.

Did you know that "Talking Books" were the very first audio versions of books? They were developed at AFB in 1932. People who are blind can still get them for free from the Library of Congress. In 1935, Helen went to a Senate hearing in Washington, D.C., to make sure that government funds were put aside for this and other programs. Even though Helen couldn't hear, she knew that sound could help educate other people. 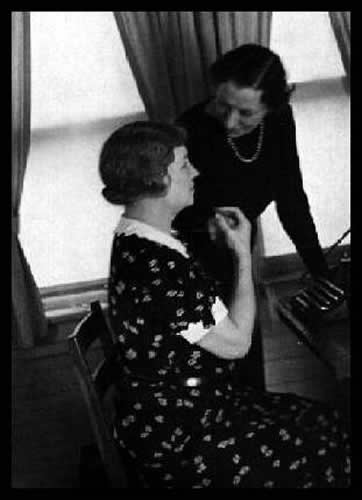 This photograph, taken in their home, shows Helen and Polly in front of two large windows. The light is bright outside, and the curtains on the windows are pulled back. Helen is sitting at her typewriter, describing something with her hands to Polly, who is leaning towards her, smiling. Helen has on a dark dress with small light flowers and white trim on the neck and cuffs. Polly is wearing a long black dress, with a white pearl necklace.

Helen wrote hundreds of articles and published many books. Her writings came to the world's attention in May 1933 when one of her books, Out of the Dark, was burned by young Nazis in Germany who hated socialism. Helen wrote an impassioned letter in response to the book-burning. 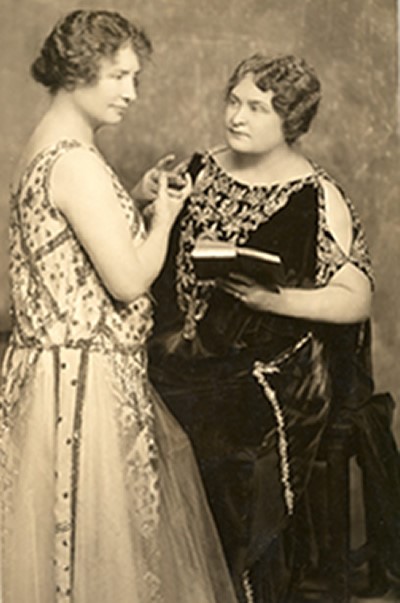 A full-length portrait of Anne and Helen during their lecture tour in 1920. Anne is seated, with a book in her left hand, which she’s reading and signing into Helen's hand. They are both wearing fancy dresses that are embroidered and have sequins. Helen's dress is white and sleeveless, and her hair is curled up behind her head. Anne's dress is dark and has cutaway holes in the short sleeves; her hair is short and shaped into small waves around her head. The women gave an autographed copy of this picture to Walter G. Holmes, manager and editor of the Ziegler Magazine for the Blind. 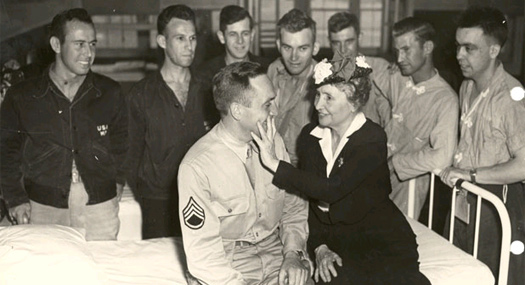 Helen is meeting a patient in Moore General Hospital of North Carolina. Paul Grossman, a sergeant from Nebraska, is sitting on his hospital cot, surrounded by his soldier friends. Helen is sitting beside him, feeling his jaw, to understand his speech. According to a story written on the back of the photograph, Paul is saying that he just won $1,260 in a contest, but he is just as excited to meet Helen. In fact, Paul called Helen one of the most remarkable figures in either the ancient or modern world! The picture was taken on June 11, 1945.

During World War II, Helen and Polly went all over the United States giving support to blind and wounded veterans. Everywhere Helen went, barriers and obstacles that faced the blind came tumbling down. Her boundless determination and her example of what a person with disabilities could accomplish helped change laws and create programs for people who were visually impaired.