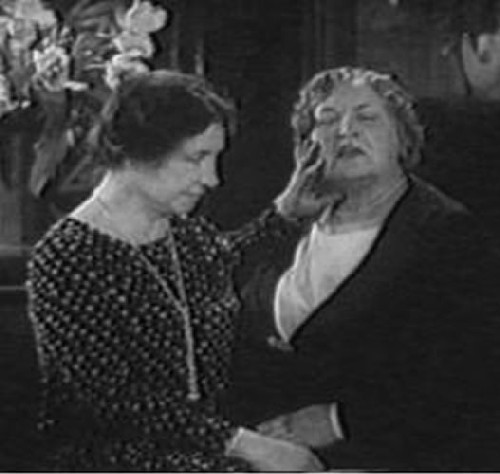 This picture, which came from a film, describes how Anne taught Helen to talk. The two women are sitting down, close to each other. Helen is touching Anne's right cheek while Anne is talking, to feel the muscles move. They are wearing more "modern" clothing than in other photographs. Helen has on a printed dress and a long chain necklace, and Anne is wearing a thin chain above a light top, with a dark cardigan and skirt. Behind them is a big vase of flowers.

Did you know Helen wrote and gave speeches? The photo above shows Helen touching Anne's right cheek while Anne is talking, to feel the muscles move.

Helen was also a gifted writer. She wrote fourteen books, many essays, articles and speeches on everything from her love of animals and nature to the importance of equal opportunities for women. She also wrote about the ideas of Swedenborg, a Swedish scientist and philosopher (1688-1772) who believed that by helping others, you grow and help yourself. 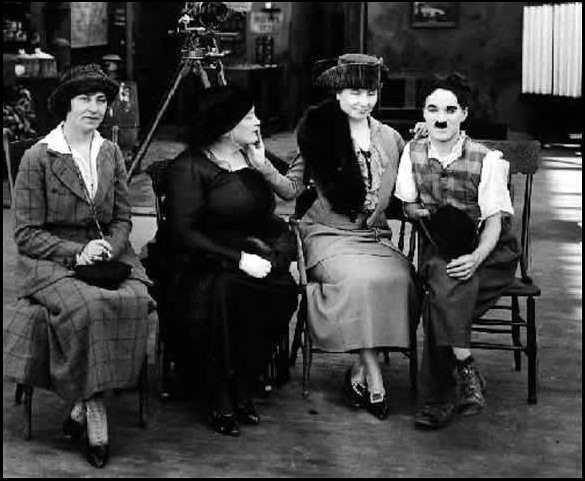 This group shot from 1918 shows Helen and friends on a movie set, with the camera behind them. On the far left is Polly Thompson, then Anne, Helen, and Charlie Chaplin, a major comic film actor from the era of silent movies. Behind them all are many film props, such as signs and furniture. Chaplin is in his signature look of big, dark eyebrows, dark eyes (lined in eyeliner!), and a dark bushy moustache. Helen has her left hand on his shoulder and her right hand on Anne's mouth, feeling her speak. Both Helen and Anne have furs draped on their shoulders.

In 1914, Polly Thomson began working for Helen and Anne—they were known as "the three musketeers." In 1918 they traveled to Hollywood to make the movie Deliverance, a silent movie about Helen's life. In the film, Helen and Anne starred as themselves. Plus Helen met movie stars like Charlie Chaplin.

This clip from the movie shows Helen Keller flying in an old biplane.

This close-up, action shot stars Helen, Anne, and Henry Ford, the famous automobile inventor. Helen and Ford are shown in profile, with Anne facing the camera. Everyone is smiling. Helen has her hand on Ford's mouth, to feel him speak, and Anne seems to be laughing. Helen and Anne have on big black hats with lots of dark feathers in the front. They are also both wearing loose, white blouses. Ford has on a dark suit, white shirt, and a dark printed tie. His short hair is blowing in the breeze.

All sorts of people wanted to meet Helen, including Henry Ford, the man who invented the Model-T Ford automobile, one of the most popular cars in the world at that time. Helen also met three generations of the Rockefeller family, who formed the Standard Oil Company. The Rockefellers donated a fortune to the arts, culture, science, politics, and national parks. Here's Helen in her dressing room in a vaudeville theatre. She is sitting at a makeup table (which does not have a mirror), brushing her cheek with a giant powder puff. Behind her, hanging on the wall, are many elaborate outfits, including a silk robe, a dark evening dress, and a full-length fur coat. Helen has on a sleeveless, patterned dress that goes down to her toes and shiny high-heeled shoes.

Helen's acting career continued on the vaudeville stage. She went on tour with Anne, giving lectures and performing in shows that featured drama, comedy, and music. Helen enjoyed the glamorous lifestyle, unlike Anne. Eventually the performances became too tiring for Anne and they stopped their tour in 1922. This photograph is from 1919, just after World War I. Helen has the arm of a newly-blinded soldier; they are walking down a woodsy path in Baltimore, Maryland. Behind them is a stone wall and a large house with many windows, which is the Red Cross Institute for the Blind. Helen is wearing a long, dark coat and a woolen hat. The soldier is dressed in a military uniform. He has a bandage over his left eye and is using a cane to help him walk. Bringing up the rear, also on the path, are Anne, Polly, and two other men, one in a military uniform.

Helen was continually drawn to the cause of the underdog. As a pacifist, she protested against the First World War and was one of the early members of the American Civil Liberties Union. In the early 1930s, as America was dealing with the Depression, Helen got on the radio in New York to discuss the needs and rights of the unemployed and the poor.