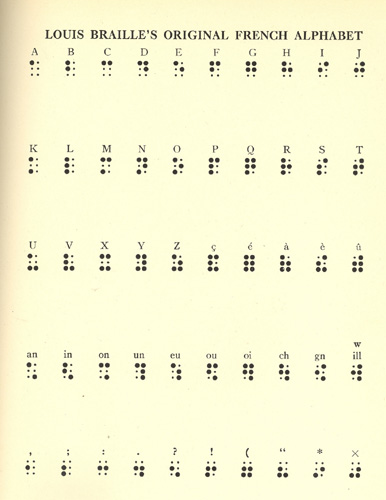 In 1821, shortly after becoming the Institute's new director, Dr. Alexandre François-René Pignier invited Charles Barbier to address his students. Barbier was an artillery captain in the French Army who had devised a system for soldiers to communicate at night without a sound. His system combined 12 dots to represent sounds, and he called it sonography. It is also referred to as "night writing." He believed his invention could be of great value to the blind.

Both students and teachers at the Institute were intrigued by the promise of sonography, and, despite the difficulty of the system, sonography was introduced in the school as an auxiliary teaching method. Louis and his classmates soon identified one of the chief flaws of Barbier's system in addition to its complexity: it was based on the 36 sounds of the French alphabet and did not lend itself to spelling or punctuation. Louis determined to take Barbier's system and improve upon it.

Between the ages of 13 and 16 Louis worked on perfecting an embossed dot system. Like Barbier's, Louis' system used raised dots, but beyond that similarity Louis' ideas were his own. For three years Louis spent his free time refining his code. On the weekends, evenings, and summer vacations in Coupvray, Louis could be found with paper, slate, and stylus, diligently working.

When at age 15 he felt he had an adequate code, he shared it with Dr. Pignier, who had become his mentor. Louis' system, based on a six-dot cell, was both simple and elegant. A full braille cell consists of six raised dots arranged in two parallel rows, each having three dots. Sixty-four combinations are possible using one or more of these six dots. A single cell can be used to represent an alphabet letter, number, punctuation mark, or even a whole word.

Dr. Pignier encouraged the students at the Institute to use Louis' code. With it, they were able to achieve a level of literacy previously unavailable to them.

200 Years: The Life and Legacy of Louis Braille