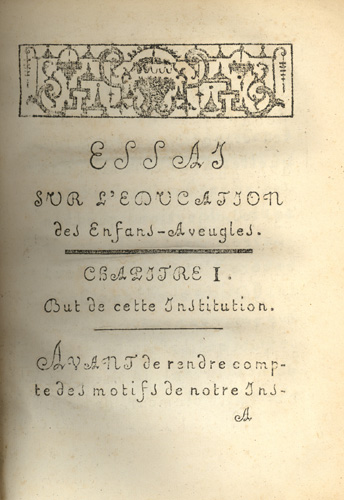 Page from Essay on the Education of Blind Children [Essai Sur L'Education des Enfans-Aveugles] (sic.) by Valentin Haüy, 1786. The text is printed in a curling, decorative font. A horizontal rectangle towards the top of the page contains an abstract pattern of curls and shapes reminiscent of a garden maze.

The translation of the page is as follows: Essay on the Education of Blind Children. Chapter 1. Aim of the Institute. Before providing an explanation of our Institute...

The school where Louis Braille was to spend the rest of his life—as both pupil and teacher—was called the Institute for Blind Youth. The Institute was the first school for blind children anywhere in the world. It was founded in 1786 by Valentin Haüy, a pioneer in the education of students who are blind. Haüy was born in 1745, and when he was in his twenties, he witnessed an incident where blind people were ridiculed and made fun. A clever and compassionate man, he became interested in education for those who were blind. He was particularly dedicated to developing a way to teach reading and writing. Through experimentation, Haüy developed a revolutionary process for embossing books—books that had raised bumps in the form of letters.

In June 1784, Haüy asked a 17-year-old boy who was blind, named François Le Sueur, to study with him and offered to pay him as much as he was earning through begging. In only three months he taught François to read and write using embossed books. Over the next few years he was able to raise money to open a school, where the curriculum focused on academics, music, and manual skills.

In 1801, the Institute for Blind Youth was merged with another famous institute for blind people, and Haüy resigned.

200 Years: The Life and Legacy of Louis Braille