Here are four extremely popular sources of books, magazines, and newspapers formatted to be accessible to people with visual impairments and blindness. 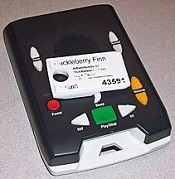 The Library of Congress National Library Service (NLS) has been producing Talking Books since 1931, and today their collection, which contains over 150,000 titles, is distributed to eligible recipients through a network of regional libraries.

All current releases and over half of back titles are now available in digital format. Those back titles that are not available digitally are available on audio cassette.

Talking books and magazines can be borrowed on digital cartridge from your regional library and played on an NLS Digital Talking Book Player, which you can also obtain on free loan from your regional library. Users who are comfortable with downloading and transferring audio files can also search the BARD catalog, download an audio file directly, then transfer and play books and magazines on the NLS player, or on another commercially available third-party Talking Book capable device.

NLS books and magazines, along with the other materials described in this section, are produced as DAISY books, a special document format for text and audio recordings that accommodates section and other navigation markers. Two of the most popular commercially available DAISY players are the Victor Reader Stream from HumanWare, the Book Port DT from the American Printing House for the Blind, the Plex Talk by Freedom Scientific, and the Blaze EZ by Hims.

If you use an iPhone, or Android phone you have an even more convenient option. You can download the BARD Mobile app, then use your phone to browse new Digital Talking books and magazines as they are released, search the NLS back catalog, and download titles to your phone and listen to them, all on one device. This feature-filled app includes variable speed control, a sleep timer, and a complete suite of navigation controls. To learn more about the NLS Talking Digital Book program, call 888-NLS-READ (888-657-7323).

Even if you can no longer read a print newspaper, you can still keep up with all the local and national goings on. The National Federation of the Blind (NFB) offers a free service called NEWSLINE that allows eligible recipients to phone a local number and use the phone dial pad to navigate and listen to any of over 300 participating national and local newspapers, magazines and other news sources. Offerings include such national publications as USA Today, the New York Times and the Washington Post. Small town papers are also included, ranging from the Aberdeen American News to the Zanesville Times Recorder. Local TV listings are also available.

Unlike Digital Talking Books, NEWSLINE periodicals are not read by human narrators. The system uses text-to-speech to turn printed text into spoken recordings, which can take a bit of getting used to. As is the case with NLS Talking Books and magazines, however, tech savvy users have additional options. If you have an e-mail account, you can subscribe to various publications and have the latest editions sent to your inbox as soon as they are available.  Smartphone users can also subscribe and read publications on their devices. The iPhone App Store offers the NFB NEWSLINE app, an easy to  use interface for subscribing to and reading periodicals and TV listings. There app is not available for Android at this time, but Android users who are Bookshare members (see below) can use the Go Read app to download and read NEWSLINE periodicals.

To learn more about NFB NEWSLINE, contact the National Federation of the Blind toll free at 866-504-7300

Bookshare is an accessible online library for individuals with print disabilities, including the blind and dyslexic. Currently, the Bookshare collection contains close to 350,000 text titles, which eligible users can add to their personal libraries and read online. Titles can also be downloaded and read either on a computer, a smartphone or tablet, or a commercially-available DAISY reader, including the Victor Reader Stream from HumanWare, and the Book Port DT from the American Printing House for the Blind.

Students of all ages are eligible for a free Bookshare membership. K–12 students can also download many of their textbooks free of charge thanks to the National Instructional Materials Accessibility Center (NIMAC). Other eligible individuals can subscribe for $50 per year. You can reduce this cost, however, by contributing scanned books to the Bookshare library.

Bookshare is a great resource for locating accessible versions of new and bestselling titles.  You will almost certainly find that new must-read book, including New York Times best sellers, at Bookshare several months before it is recorded and made available in Talking Book format.

Android users can use the Go Read app to search the Bookshare library, and download and read books on their mobile device. Apple  iOS users can use the official Bookshare Read2Go app to access Bookshare titles. Another app that does an excellent job accessing Bookshare titles is Voice Dream Reader. This app will also store and speak PDF files, word processing files, spreadsheets, and other documents in your choice of dozens of different voices that you can obtain via in-app purchases. Check out an AccessWorld review of Voice Dream Reader in the August 2013 issue.

As complete as the NLS Talking Book and Bookshare libraries are, not every title is available through these services. For example, science and math texts often include complicated charts, graphs, and other images that are critical to the understanding of the subject matter but that do not translate well into simple text. These sorts of texts need to be described by a human reader, and this is where Learning Ally excels.

Learning Ally uses a network of volunteer readers to record a large percentage of the books in their searchable catalog, which they then make available in a number of formats for students, professionals, and others with print disabilities. Charts and graphs are described in Learning Ally recordings, and markers are placed at the top of each new page so students can easily locate reading assignments or passages of note.

Learning Ally memberships cost $119 per year. The Learning Ally library currently includes over 80,000 titles, ranging from popular leisure reading to the most esoteric of titles.  A recent search of newly recorded books includes Calico Joe, by John Grisham, The Kid’s Guide to Service Projects, by Barbara A. Lewis, and State and Local Government: Politics and Public Policies, 7th Edition, by David C Saffell.

Learning Ally materials can be downloaded and played on enabled devices, such as the NLS Player, the Victor Reader Stream and the Book Port DT.

Learning Ally titles can also be ordered on DAISY CDs, which require a special DAISY player.  A complete list of Learning Ally supported devices can be found on the Utah State Instructional Materials Access Center website.

There are also Learning Ally apps available for both iPhone and iPad, and Android smartphones and tablets.

Most Learning Ally materials come in Classic Audio format. Various volunteer narrators, who often have specialized knowledge in math, sciences, and other fields of study, record the text and describe any and all charts, graphs, and other extras.

Recently, Learning Ally began offering some of their titles in two new formats:

Next » Mainstream Recorded and Audio Books: Resources for People with Print Impairments
Share