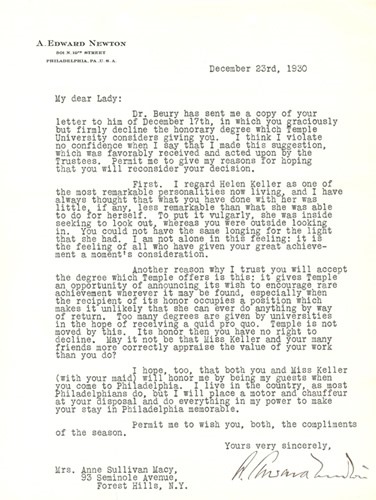 Letter to Anne Sullivan Macy from A. Edward Newton, Chairman of the Board of Trustees at Temple University, urging her to accept her honorary degree from the university, December 23, 1930. Full transcript of letter shown below.

In October 1930, Temple University in Philadelphia, Pennsylvania sought to honor both Anne and Helen with honorary degrees.

Anne's stubborn nature initially led her to refuse the honor, unlike Helen who graciously accepted the award. In the excerpt below, bibliophile and Chairman of the Board of Trustees at Temple University, A. Edward Newton, tries to convince Anne to accept the award. An image of this letter appears on the left.

I regard Helen Keller as one of the most remarkable personalities now living, and I have always thought that what you have done with her was little, if any, less remarkable than what she was able to do for herself...she was inside seeking to look out, whereas you were outside looking in.

Anne would not be budged, and Newton said he would forcibly confer the honor upon her. Anne said she would not attend the ceremony. The more strenuously she insisted on being omitted from the event, the more attention she drew.

At the ceremony in 1931, President Charles E. Beury introduced Newton, who was presenting the award to Helen. Newton's speech transitioned from praise for Helen to an impromptu address about Anne. This rallying cry was picked up by Governor Pinchot of Pennsylvania, who was attending as a recipient of an honorary degree. Pinchot demanded that the audience vote with their feet to give Anne an honorary degree. Everyone in the audience rose except for one woman, Anne, who had secretly entered the auditorium from a side entrance without the knowledge of Helen and Polly.

Letter to Anne Sullivan Macy from A. Edward Newton

Dr. Beury has sent me a copy of your letter to him of December 17th, in which you graciously but firmly decline the honorary degree which Temple University considers giving you. I think I violate no confidence when I say that I made this suggestion, which was favorably received and acted upon by the Trustees. Permit me to give my reasons for hoping that you will reconsider your decision.

First, I regard Helen Keller as one of the most remarkable personalities now living, and I have always thought that what you have done with her was little, if any, less remarkable than what she was able to do for herself. To put it vulgarly, she was inside seeking to look out, whereas you were outside looking in. You could not have the same longing for the light that she had. I am not alone in this feeling: it is the feeling of all who have given your great achievement a moment's consideration.

Another reason why I trust you will accept the degree which Temple offers is this: it gives Temple an opportunity of announcing its wish to encourage rare achievement wherever it may be found, especially when the recipient of its honor occupies a position which makes it unlikely that she can ever do anything by way of return. Too many degrees are given by universities in the hope of receiving a quid pro quo. Temple is not moved by this. Its honor then you have no right to decline. May it not be that Miss Keller and your many friends more correctly appraise the value of your work than you do?

I hope, too, that both you and Miss Keller (with your maid) will honor me by being my guests when you come to Philadelphia. I live in the country, as most Philadelphians do, but I will place a motor and chauffeur at your disposal and do everything in my power to make your stay in Philadelphia memorable.

Permit me to wish you, both, the compliments of the season.