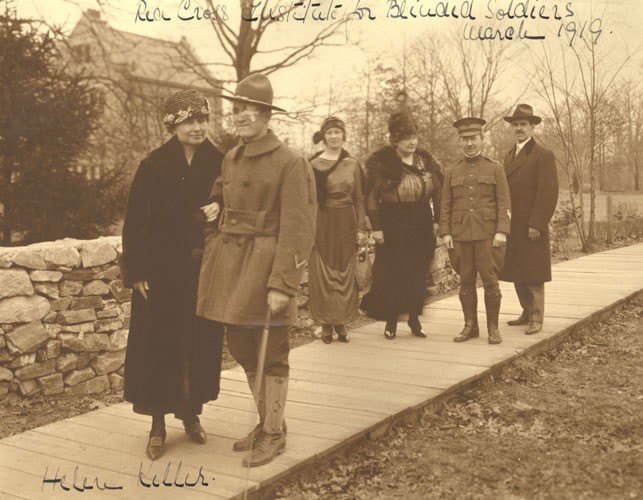 Anne, Helen, and Polly visit Evergreen, the Red Cross Institute for Blinded Soldiers in Baltimore, Maryland, March 1919. This picture shows Helen walking with a blinded soldier, her arm linked with his. Polly and Anne follow behind with a Red Cross official in uniform and another man in civilian clothes.

On April 9, 1917, Helen wrote Anne and Polly in Puerto Rico that the United States had declared war on Germany three days earlier. The two women immediately returned to the United States. Back home, Anne and Helen felt the need for a fresh start in a house that did not remind them of the breakup of Anne's marriage and earlier happy years at Wrentham. The Wrentham house was sold, and the two women bought a home in Forest Hills, New York. Polly always remained an intrinsic part of the household but was never a financial partner of Helen and Anne's.

Anne and Polly spent much of this time accompanying Helen as she delivered anti-war speeches and visited blinded servicemen. On one occasion the three women visited Evergreen—the Red Cross Institute for Blinded Soldiers in Baltimore, Maryland. Nella Braddy Henney, in her biography Anne Sullivan Macy, describes Anne as "seething with fury" as a result of this visit. She declared that all their work was useless in the face of the chauvinism that brings about war and that will continue to leave men and women blind and maimed.