Touchscreen Smartphone Accessibility for People with Visual Impairments and Blindness 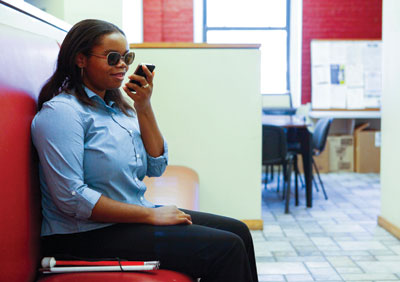 When a sighted person uses a touchscreen smartphone or tablet, he or she taps icons or slides a finger across the display in order to make things happen. Happily, the three major touchscreen platforms from Apple, Google, and Microsoft, each include two built-in accessibility features for people with visual impairments: a screen magnifier and a screen reader.

If you have low vision and have used a screen magnifier on a computer, you probably already know everything you need to know about how to use a screen magnifier on a mobile device. If you have never used a computer, don't worry. We will describe how to enable screen magnification on the device of your choice, and provide guidance on how to enlarge text, adjust the color palette, and customize other display settings in order to improve your ability to use a touchscreen device. After reading the section below on screen readers, you may decide you also want to enable your device's built-in screen reader for even greater accessibility.

Smartphone screen readers use human-sounding, synthesized voices to read and review the elements displayed on the smartphone touchscreen. Computer screen readers respond to keyboard commands Here's how it works with a touchscreen: A smartphone touchscreen is composed of a pane of glass with a thin membrane layered on top. This membrane is smart, just like your phone. For a sighted person, touching a finger to an icon on a smartphone display causes a control to be activated. When you use a screen reader, that touch instead causes the device to speak the information located on the display directly beneath your fingertip. Touch the display in different places and you will hear the names of different icons, or snippets of descriptive text.

Let's say you have tapped the display and your screen reader has identified the Play icon on your device's music player. To activate the Play control, you next perform a double-tap (tap twice in rapid succession) anywhere on the screen. The screen reader will interpret this gesture as though you were a sighted user issuing a single tap on the identified control. Voila—the music starts to play.

Edit fields are areas that require the entry of information (such as the phone number you'd like to dial or the text of an e-mail you'd like to send). When you double-tap an edit field, the device's onscreen keyboard appears. Most touchscreen devices offer at least two ways to type.

There are many other gestures that enable users with visual impairments to use a touchscreen phone or tablet, but Apple, Google, and Microsoft use slightly different commands to accomplish the various screen reading functions. Consequently, we will wait and describe touch gestures more thoroughly as we introduce each platform. For now, just know that it is possible to use a touchscreen device with absolutely no vision at all.