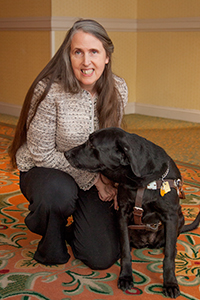 Editorial note: For 30 years, the Center on Disabilities at California State University, Northridge (CSUN) has hosted an Annual International Technology and Persons with Disabilities Conference, known as a forum that showcases cutting-edge technology and practical solutions for people with disabilities. AFB director of web services, Crista Earl, checked out the exhibit hall and sent this report.

The exhibit hall opened here on Wednesday, and I made my first pass. I missed a lot, but I can tell already that there are a few recurring themes, as usual.

So many products are using a camera to solve a problem for people who are blind or visually impaired. Besides the obvious, and well-established, uses of camera in magnification systems of a wide variety, here are a few interesting and exciting products and prototypes:

Side by side, I found two companies selling smartphone-based OCR apps. That's an app that will read printed text out loud. In both cases, you point the camera of the phone at the restaurant menu, name tag, or envelope and (after perhaps pushing a button, depending on the product) the phone reads the item out loud. 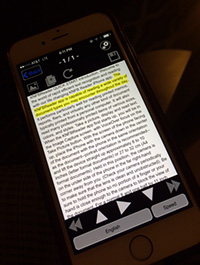 One of these products is familiar to most of us, the KNFB Reader (pictured at right). It's been around now for a long time. They were showing the iOS (iPhone-family) version and the new Android version. This impressive little product sells for $99.99.

Next to KNFB Reader, I found Amedia, selling a $30 app to read text, iYomube, which is iOS-based, too. They demonstrated it reading our glossy conference name tags and a few other things. Once you've launched the app, there's no need to hit a button with this one, it just starts reading. I loved the price.

In the same aisle I found Issist Assistive Technologies, who had an Android-based magnification and OCR device and suite of apps, Aquos. The Aquos device was different in a few ways: First, it was both hardware and software, and primarily a magnifier. It came with a stand, which steadied the device so that the image didn't move all over the place. Since the device is small, about the size of the iPhone 5, the shaky handheld image was a big problem.

By tapping one corner of the screen (screen is one entire side of the device) you can have what you've been looking at read out loud. This little item was over $800.

If you already have a compatible Android device, though, you can download just the suite of apps, called Mercury, and run them on your own device. This package (not including your Android tablet or phone) is $495. 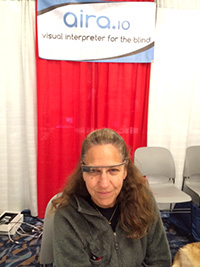 On the other side of the giant exhibit hall, there was a new company, Aira Tech Corp, demonstrating a prototype of a Google Glass application. Similar to several other product/services we've heard about recently, this one connects the wearer to an "agent" who will describe or give directions based on what is transmitted through the camera in the glasses. The agent, Erica, guided me with verbal directions around a section of the exhibit hall. She let me know when to turn and some of the features I was passing. She couldn't see down, but happily there weren't steps in the route.