Fitbit and Up24: Are These Health-Tracking Devices Accessible to Exercisers Who Are Blind? 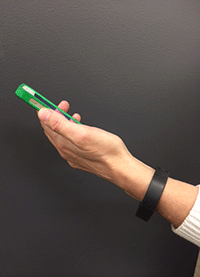 Tracking health and fitness is all the rage. Should you jump on the bandwagon? Can you? That is, are these tracking devices accessible to users who are blind?

I've tried two such devices: the Fitbit Flex™ (usually just called Fitbit) and the Up24™ from Jawbone.

What Do These Things Do?

In simple terms, they log and report the steps you take. Basically, you wear a wristband with a small device, and that device talks to your smart phone via Bluetooth (don't worry, it's just a wireless thing that lets the info from your Fitbit go to the phone). An app on your phone lets you see how many steps you've done so far today, go back to previous days, check the status of the battery on the device, and many other things. It also uploads the info to your online account, if you set one up, so you have access to even more.

So, I bought a Fitbit and joined her circle. Then my friends joined. You can invite friends of friends, too.

Is this support or competition? Well... both. Some friends are highly competitive and work to be at the top of the 7-day list. Others are less intent on being at the top, and send cheers to friends at the top, or who climb suddenly. Either way, it's a great tool to form circles of people trying to get moving.

Athletes who are blind or visually impaired are always looking for tools that will help them improve their performance. Sighted runners and cyclists have a lot of choices of advanced watches, heart rate monitors, and apps to help log and monitor workouts.

So, will the Fitbit do the trick?

Measuring your marathon training in steps is a little like a billionaire doing accounting in pennies. Yes, a 20-mile run is done one step at a time, and counting the steps isn't exactly invalid, but what runners really want to know includes minutes per mile, heart rate, split times over a distance, and such. The Fitbit app is accessible, but it isn't this. It is really suited to the person for whom walking to the corner to catch the bus would be an exercise improvement.

Is This a Good Gift Idea?

If your friend wants to get more exercise, and likes technology, and has a smart phone, I'd say yes. I'm loving mine, and I don't even mind (OK, I enjoy) the taunts from my friends when they pass me on our 7-day totals.

One Problem to Watch Out For

The clasp on the Fitbit Flex band clings precariously. The band is light and comfortable, and its disappearance is hard to detect. So, I've scattered quite a few of these gizmos around the city. Sometimes people bring them back to me, but mostly I've become a regular at Best Buy. I'm counting on this one to last until the Apple Watch comes out and I can decide if I should go that route.