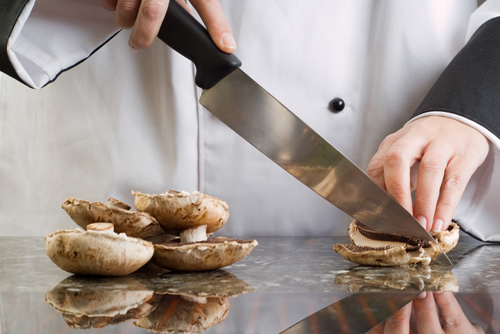 I was catching up on some television recently when I caught the season premiere of MasterChef, starring Gordon Ramsay, Graham Elliot, and Joe Bastianich. My wife said to me, "Wait, I think I just saw a white cane." She rewound the recording and there was definitely a woman using a white cane. "Oh no," I said, "how are they going to portray her on this show?"

We continued watching, and they teased it a little bit. They had her as the last person to compete for a spot on the episode. MasterChef features cooks from around the country competing to be the next "Master Chef." The winner receives $250,000, his or her own cookbook, and a trophy. The contestant, Christine Ha, is blind from an autoimmune disorder called neuromyelitis optica (NMO). She is a graduate student in writing at the University of Houston. They were dramatic about her entrance, and had Ha enter on her own, using her white cane. Her husband assisted her by pushing in the cart with all of her cooking ingredients and apparatus.

The judges asked Ha a few questions while she was preparing her dish. We learned Ha is putting off her thesis for the competition. They asked when she went blind, and she explained that she lost most of her vision in the past 10 years or so.

She seemed to cook well, but when going to serve her meal, she noted that the rice was not cooked properly. She decided to serve the meal without the rice. One of the judges, Joe, seemed to dwell on Ha's blindness and seemed in utter awe. He didn't seem to have much experience with a person with vision loss, which is understandable, as it is a small incidence disability. It may have been a little much for my tastes, but I am a little biased about that stuff. Gordon Ramsay and Joe both loved her meal. The other judge, Graham, said that she wasn't able to serve the meal properly, as the rice was an important part of the dish, and he voted against her due to this fact. This was pretty honest of Graham, and I appreciated him saying that. He did comment that it was very good, even without the rice.

After watching the episode, I read an article from the New York Post about Christine Ha and MasterChef. It seems that they became aware of her through her blog, theblindcook.com. The casting personnel contacted her last year because they thought she would bring a good story (and she is a good cook!). Ha's blog allows her to mold two of her passions, writing and food.

I look forward to watching her next cooking adventure on MasterChef. I am grateful they chose such a positive representative of persons who are blind or visually impaired.

Let me know in the comments what you thought of the portrayal.