Key Employment Statistics for People Who Are Blind or Visually Impaired

Welcome to the eleventh edition of AFB's Research Navigator. This is a quarterly series - accompanying AFB's DirectConnect newsletter - from the AFB Public Policy Center. The purpose of this series is to keep you informed of user-friendly facts and figures and the latest research pertaining to people with vision loss. The series will also include the necessary background information so you may use the information most accurately. Have an idea for a Research Navigator topic? Want to know more about a statistic or line of research? Send your thoughts to AFB's Policy Research Specialist, Dr. Paola Chanes-Mora. Readers are also encouraged to check out AFB's Statistical Snapshots. This webpage is regularly updated with a wide variety of information and tools that address commonly asked questions about people with vision loss.

When discussing employment, there are four commonly used figures: unemployment rate, labor force participation rate, percentage not in the labor force, and employment-population ratio. Since it would be impossible to count and identify everyone who is employed and unemployed in the United States at a single point in time, these figures are reported as estimates, usually based on a survey of a randomly sampled portion of the population.

The unemployment rate, as calculated by the Bureau of Labor Statistics (BLS), is the percentage of the total labor force that is unemployed but actively seeking employment and willing to work. Since the unemployment rate is calculated as a fraction of the labor force, it does not count individuals who are considered "not in the labor force" - those who are not looking for work, whether they never sought employment, they left the workforce for retirement, or they dropped out of the workforce because of disability or long-term unemployment (Bureau of Labor Statistics, 2017).

The labor force participation rate, as defined by the BLS, is "the percentage of the population that is either employed or unemployed (that is, either working or actively seeking work)" (Bureau of Labor Statistics, 2014).

The percentage not in the labor force accounts for the proportion of the total population (ages 16 and up) that has either dropped out of the labor force or never entered it. This number is typically higher than the unemployment rate and, when added to the unemployment rate, provides a more accurate picture of the proportion of people who are not employed (Bureau of Labor Statistics, 2017).

As a reminder, the Census Bureau and BLS determine these estimates for the civilian, non-institutionalized population.

Now, for an update on the numbers, which have changed a little - but not dramatically - since our 2013 Research Navigator on employment. Our key source for employment information remains the BLS's Current Population Survey (CPS), which is a monthly survey of civilian, non-institutionalized persons ages 16 and up. The CPS asks the same question about visual impairment which is asked on the decennial U.S. Census and in the Census Bureau's American Community Survey: is the person blind or does he/she "have serious difficulty seeing, even when wearing glasses?" (Bureau of Labor Statistics, 2015).

First, let us look at the numbers for "working-age" (i.e., 16 to 64 years of age) individuals who are blind or visually impaired.

To determine how well April of 2017 represents employment conditions over the past year, we can review combined data from May of 2016 to April of 2017. For those months, people with vision loss ages 16-64 had a 37 percent labor force participation rate, 63 percent not in the labor force, and a 12 percent unemployment rate. For the general working-age population during the same months, the labor force participation rate was 73 percent (27 percent not in the labor force), and the unemployment rate was 5 percent. Thus, BLS estimates of employment conditions for people with vision loss in April of 2017 were slightly improved over the average for the prior 12 months (U.S. Department of Commerce, 2017b).

Because the BLS estimates the employment rate based on a monthly survey, it is possible to observe patterns in employment rates over time. The chart below presents the monthly employment-population ratio for ages 16-64 from January 2014 to April 2017, both for people with vision loss and for the general population. (Percentages outside parentheses are for people with vision loss; percentages inside parentheses are for the general population). What if we also consider seniors with vision loss?

The BLS's official, national employment statistics are not just for ages 16-64, commonly thought of as the "working age" population. Rather, the BLS bases their most popularly reported estimates on the population of all civilian, noninstitutionalized adults ages 16 and up.

On average, the employment-population ratio is 41 percent higher for adults (ages 16 and up) in the general population than for adults with vision difficulty. This gap is 4 percent greater than the gap for the working-age segment of the population, reflecting the reality and complexity of the employment challenges for seniors with vision loss (U.S. Department of Commerce, 2017b).

Employment for Males and Females

Employment rates differ by many demographic factors including race and ethnicity, sex, geography, and educational attainment. Among the already low-incidence population of people with vision loss, estimates are less reliable for smaller demographic subgroups (such as states with small populations or smaller racial groups); however, estimates for employment characteristics of males and females with vision loss can easily be reported given available data from the BLS.

The following employment-population ratio calculations are based upon the BLS's Current Population Survey estimates for May 2016-April 2017: 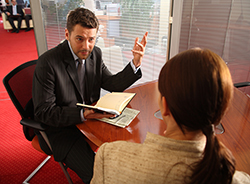 For both age ranges, women are less likely to be employed than men; interestingly, the difference in the employment-population ratio between males and females is smaller among the population of people with visual impairments than for the general population. We know that people with vision loss are less likely to be married than people without vision loss, and we know that women - on average - live longer than men. Thus, employment barriers which lead to reduced retirement savings may be particularly problematic for women with vision loss. Further research is needed to better understand the interrelationship between disability and gender (U.S. Department of Commerce, 2017b).

The American Community Survey (ACS) includes questions about the field or industry in which respondents are employed. Using data from these questions, we can determine the types of jobs currently or recently held by people with self-reported vision difficulty. 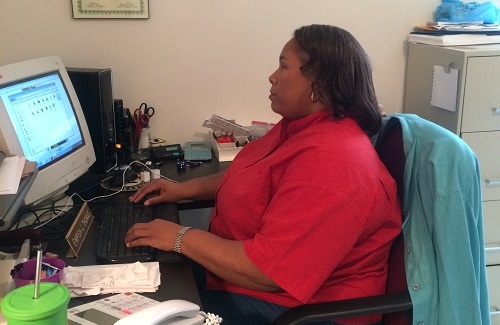 Based on combined 2011-2015 ACS data, for civilian, noninstitutionalized adults with vision loss ages 16-65, those who were currently employed were most likely to work in retail, medical, manufacturing, and entertainment (including restaurant) industries. These were also the most popular industries for employment of people without vision loss. Among people with vision loss, the most commonly reported occupations were janitor/cleaner, cashier, health assistant, and retail salesperson. The most commonly reported occupations for people without vision difficulties were manager, school teacher, cashier, and retail salesperson (U.S. Department of Commerce, 2017a).

Looking at the same dataset, but focusing instead on those adults ages 16-65 who were not in the labor force (not seeking employment) but who had worked within the past 5 years, those with vision difficulty were most likely to have been employed in retail, entertainment, manufacturing, and professional industries. Those without vision difficulty were most commonly formerly employed in entertainment, retail, professional, or education jobs. The most commonly reported former occupations for people with vision loss who were not in the labor force were cashier, janitor/cleaner, cook, and stockperson; for people without vision difficulties, the most common former occupations were cashier, retail salesperson, secretary, and school teacher (U.S. Department of Commerce, 2017a).

As we wrote in 2014, employment is far more than a paycheck, which, in and of itself, is vitally important. Employment is the economic and social foundation for stability in one's life, the lynchpin for one's independence, and an important component of one's self-definition. Employment has traditionally served as an indicator of entrance into adulthood (Silva, 2012) and provides security and stability for social roles such as getting married and raising a family (Price, Friedland, & Vinokur, 1998) . Negative effects of unemployment on psychological well-being have long been established, including that lack of employment has been shown to correlate with depression, anxiety, and low subjective well-being and self-esteem ( Cohn, 1978 ; Paul & Moser, 2009 ).

Employment is important to one's social and economic livelihood. The employment numbers for individuals who are blind or visually impaired are much lower than for the general population. And, certain socio-demographic groups among this population fare worse than others. We know that access to quality vocational rehabilitation, training programs, career counseling and mentoring, and professional resources all have the potential to make a positive difference in employment outcomes. Yet, despite all this significant research, researchers and practitioners alike continue to be faced with the problems of how to increase employability and encourage employers to hire people who are visually impaired. No doubt, investments must be made in innovative and effective programs, and they must be made available wherever they are needed. To develop and strengthen these programs, there is a need for more research, ranging from the delivery of effective hands-on and virtual vocational rehabilitation to the use of social networks and employer-focused interventions. Recently, AFB intern Lorenzo Amani wrote an insightful blog post discussing a labor market policy analysis approach to analyzing and impacting employment outcomes for people with vision loss. New and creative perspectives from inside and outside the field of vision loss will be essential to our pursuit of meaningful changes in employment and quality of life. 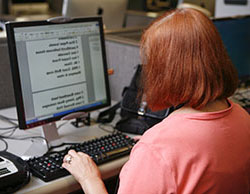 Bureau of Labor Statistics. (2013). The employment situation-December 2013. Retrieved from https://www.bls.gov/news.release/pdf/empsit.pdf

U.S. Department of Commerce, Bureau of the Census. (2017a). American Community Survey 5-Year Estimates - Public Use Microdata Sample, 2011-2015. Generated by the author via DataFerrett. http://dataferrett.census.gov/TheDataWeb/index.html

U.S. Department of Commerce, Bureau of the Census. (2017b). Current Population Survey December 2013-April 2017. Generated by the author via DataFerrett. http://dataferrett.census.gov/TheDataWeb/index.html

AFB would like to thank Dr. Stacy Kelly , Policy Research Consultant and Associate Professor in the Northern Illinois University Special and Early Education Department, for her work on the original version of this article, published in 2014.

If you have questions about this edition of the Research Navigator or other research/stats issues related to blindness/visual impairments, please contact AFB's Policy Research Specialist, Dr. Paola Chanes-Mora .

Next » Research Navigator (2016): Statistics about Seniors with Vision Loss
Share

Archive of Blindness Statistics and Reports