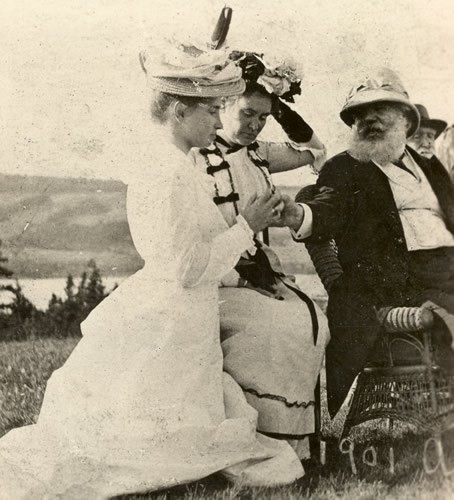 Left to right, Helen, Anne, Alexander Graham Bell, and possibly John Hitz, on a hilltop in Nova Scotia, 1901. Helen is kneeling next to Anne and Bell, who are seated. Everyone is wearing a hat. Helen's straw hat has a spiral of sheer fabric on top and a big dark feather sticking straight up on the left side of the brim. Anne wears a hat with huge flowers and a white dress with black ribbon trim and elbow-length gloves. She has one hand on her hat and the other hand in Helen's left hand. Bell is sitting on a wicker chair to the left of Anne. His head is turned toward Helen, and he is wearing a pith helmet. His right hand is outstretched to Helen's right hand, and he seems to be communicating with her using the manual alphabet. Behind Bell is another man, possibly John Hitz of the Volta Bureau.

Alexander Graham Bell was a towering figure in Anne's life from the time she arrived in Tuscumbia, Alabama until the early 1920s. The inventor and educator of the deaf strongly supported Anne's great talent as a teacher. Many times, Bell helped her in dealing with others. He gave her emotional support as well.

Bell understood Anne's anxiety over her past. He was also good at dealing with her prickly nature. More importantly, perhaps, he came to her aid in times of crisis. Several times during Anne's early career as Helen's teacher, she was accused of being too controlling. Some claimed she tried to mold Helen's thoughts and opinions. Bell's solid support was a constant source of strength to Anne as can be seen in the following quotation from Nella Braddy Henney's book Anne Sullivan Macy:

It was an immense advantage for one of my temper, impatience, and antagonisms to know Dr. Bell intimately over a long period of time. In a very real sense he was the prophet of my destiny....

I never felt at ease with anyone until I met him...I was extremely conscious of my crudeness, and because I felt this inferiority, I carried a chip on my shoulder that somebody was forever trying to snap off. I never forgot what my cousin Anastatia said once to a caller, "She has had no bringing up. A colt or a heifer in the pasture has better manners." Dr. Bell had a happy way of making people feel pleased with themselves. He had a remarkable faculty of bringing out the best that was in them. After a conversation with him I felt released, important, communicative. All the pent-up resentment within me went out in genial atmosphere he spread about him.

I learned more from him than from anyone else. He imparted knowledge with a beautiful courtesy that made one proud to sit at his feet and learn. He answered every question in the cool, clear light of reason. In his utterance there was no trace of animus against individuals, nations, or classes. If he wished to criticize me, and he often did, he began by pointing out something good I had done in another direction. When I bewailed my mockery of an education he soothed me: "You were at least not hampered by preconceived notions of how to proceed with your little pupil and I think that an advantage. You did not take to your task standardized ideas, and your own individuality was so ingrained that you did not try to repress Helen's. Being a minority of one is hard but stimulating. You must not lay so much stress on what you were not taught by others. What we learn from others is of less value than what we teach ourselves."