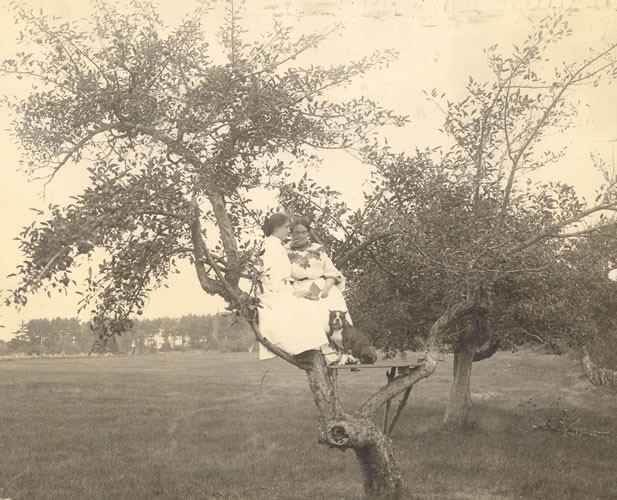 Helen Keller reads Anne's lips with her fingers as they sit together in a tree. A dog at their feet sits on a wooden board placed between two strong branches of the tree. Both Helen and Anne wear long, high-necked, light-colored dresses. Their hair is pulled back in buns. Wrentham, Massachusetts, 1904.

In June 1892, Anne was elected a member of the American Association to Promote the Teaching of Speech to the Deaf. In 1894, Alexander Graham Bell asked her to give a speech at an Association meeting. She was so shy, however, that Bell had to deliver the speech for her.

It was at this meeting that Anne and Helen met a man named John D. Wright. He convinced them to attend a new school in New York City run by him and a colleague. Helen was the only deaf-blind pupil at the Wright-Humason School for the Deaf. Anne was critical of the teaching methods used there, which were very different from hers. She writes the following to John Hitz, Alexander Graham Bell's assistant at the Volta Bureau:

Helen learned language almost as unconsciously as the normal child. Here it is made a "lesson." The child sits in-doors [sic], and for an hour the teacher endeavors more or less skilfully [sic] to engrave words upon his brain....The contrast between these children's plodding pursuit of knowledge and Helen's bounding joyousness makes me wonder.

Excerpt of Anne's Letter to John Hitz (No Date)

Thank Heaven, I didn't have to follow a curriculum when I began teaching Helen. I am convinced she wouldn't have learned language as easily as she did. It seems to me, it is made as difficult as possible in school for a child to learn anything.

Helen learned language almost as unconsciously as the normal child. Here it is made a "lesson." The child sits in-doors, and for an hour the teacher endeavors more or less skillfully to engrave words upon his brain. As I look back, it seems as if Helen were always on the jump when I was teaching her. We were generally in the open air doing something. Words were learned as they were needed. She rarely forgot a word that was given her when the action called it forth, and she learned a phrase or even a sentence as readily as a single word when it was needed to describe the action.

Apparently, children learn language more quickly when they are free to move about among objects that interest them. They absorb words and knowledge simultaneously. In the class-room they cease to be actors in the drama, they sit and watch the teacher doing something with her mouth which does not excite their curiosity particularly. Passivity does not stimulate interest or mental energy. The child learns eagerly what, he wants to know, and indifferently what, you want him to know.

I have thought much about methods of teaching since I came here. The contrast between these children's plodding pursuit of knowledge and Helen's bounding joyousness makes me wonder. When I go into one of the class-rooms and see little children sitting demurely behind their small desks, while a teacher sits in front of them, holding an object in her hand for their inspection, then slowly speaking the name of the object which they vainly try to imitate, I feel somehow as if they were chained to their seats, and forced to gaze intently at a giantess who made faces at them.

I very seldom speak of what is in my mind. I do not think teachers are at all open-minded. To say that they do not welcome ideas which imply criticism of their methods is to put it mildly, I do not know if all teachers close their minds to the stupidities they practice. I have known only teachers of the blind and the deaf, and I pity them more than I blame them. When you consider the huge doses of knowledge which they are expected to pour into the brains of their small pupils, you cannot demand of them initiative or originality. The pressure upon them is so great, they find it necessary to resort to forcing methods. There follows the intensive cultivation of the memory. The little brains are crammed with knowledge to the point of indigestion. They learn a little of everything, and by a super-effort retain it until examinations and tests are over when they straight-way forget it, not having learned any use for their too vast learning.

There isn't a doubt in my mind that schools force upon the young an abnormal life. The hours are too long, too many subjects are taught, too complicated methods are employed. The teacher has no time to give to the individual needs of the children.

I wish you would let Dr. Bell read this letter. If he thinks I am right, perhaps he could use his great influence at the coming convention to impress upon the instructors of the deaf that what their pupils need is more out-of-door lessons–lessons about living things–trees and flowers and animals–things they love, and are curious about. The number of subjects taught is not so important as that the children should learn language for the joy of it. The miracle of education is achieved when this happens.

The child happily interested in his work learns quickly and without conscious effort. All I have written may be antediluvian to Dr. Bell. If he says nothing can be done about it, I have labored enormously with pen and ink, and brought an inky mouse.

[The following note was added to the copy:]

"Dr. Bell is so delighted with your criticism of educational methods in the schools for the deaf that he is very desirous for you to prepare a paper (it need not be long) for the Convention on the subject. I am sure you have not kept a copy of the letter; so I am mailing a copy to you.