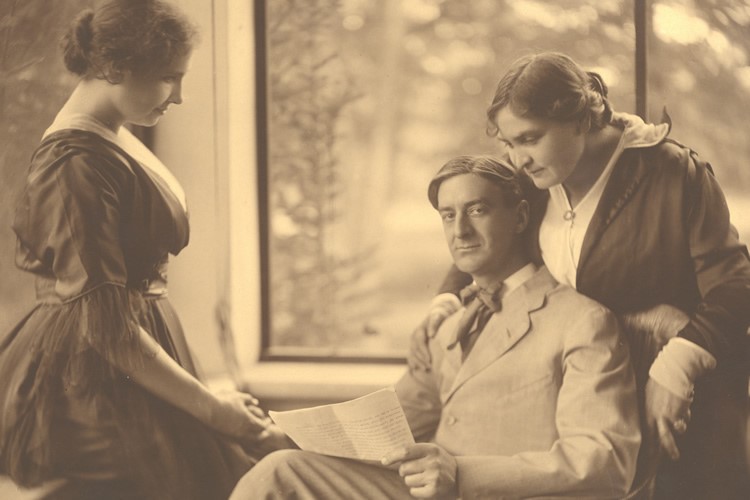 In this photograph taken at Wrentham, circa 1905, John is seated in three-quarter profile between Helen and Anne. Helen stands in front of him and Anne stands behind him. She leans against the back of his chair with her right hand on his shoulder. He is holding a manuscript and looking up at the camera while manually signing into Helen's hand. John wears a light colored suit with a darker necktie that seems to be tied in a soft bow. Anne wears a dark, two-piece dress with a white blouse under the jacket. Helen's dress is also dark, with a deeply curved white collar, a high waist, and full three-quarter length sleeves with net ruffles at the elbow.

In 1908, Helen wrote The World I Live In and two years later her poem "The Song of the Stone Wall" was published. Anne's husband, John Macy, was instrumental in the editing and publication of these works. Helen recalled, "I cannot enumerate the helpful kindnesses with which he smoothed my rugged paths of endeavor."

He continued his work as an editor at A Youth's Companion and published his own poetry and literary criticism in leading magazines. Macy was a socialist and he corresponded with socialist writers such as Upton Sinclair, with whom he discussed politics and literature. His politics had a strong influence on Helen, and by 1909, she had joined the socialist party. Anne, however, could not be convinced of change through political action. In 1955 Helen wrote in Teacher: Anne Sullivan Macy:

She was never a standard-bearer, except in the sense that she fought against all man-wrought limitation as a crime, and held freedom of mind, conscience and inquiry as sacred.

Helen and Anne had very different attitudes toward politics, and each pursued her own path. Anne did not try to interfere with her pupil's opinions and actions.