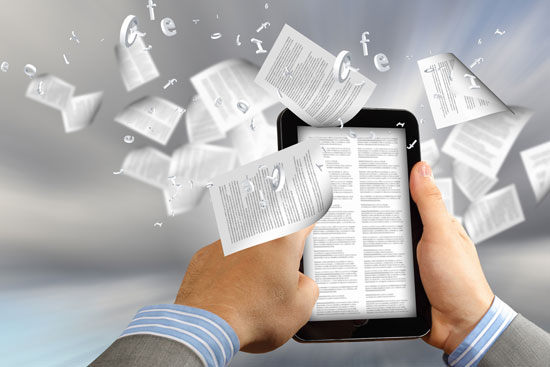 In addition to recorded book collections for people who are blind or visually impaired, it's possible to obtain and access mainstream electronic books and periodicals.

Project Gutenberg, named in honor of Johannes Gutenberg, inventor of the moveable type printing press, was founded in 1971 with the goal of making culturally important works of literature freely available to the public. The collection currently includes over 47,000 public domain titles ranging from the Declaration of Independence, which was the very first Project Gutenberg submission, to the complete works of Homer, Shakespeare, Captain John Smith, and nearly all other writers whose works are in the public domain.

Project Gutenberg books are available in a number of formats, including plain text files you can read with any word processing software, HTML files you can read using Internet Explorer, Mozilla Firefox or another web browser, and a wide selection of mobile apps, including Read2Go for Apple iOS and the Go Read app for Google Android.

These days a growing percentage of books are being sold as eBooks, digital rights management (DRM) protected computer files that contain the entire book, from table of contents to charts and illustrations. Amazon is by far the largest seller of eBooks, which they call Kindle Books.  Barnes & Noble also sells eBooks, which they dub Nook Books. Searching either of those websites, you will likely find your desired book listed in three or even four different formats.  The title may be available in a recorded book format, hardcover and paperback editions,  and, often, an eBook edition, which you can purchase and automatically download to an eBook reader to read. (For more on shopping online, see the Online Shopping and Banking Guide.)

The bad news is that the standard Amazon Kindle and Barnes & Noble Nook eBook readers are less than completely accessible. They can be made to read text aloud, but menus are at best tricky to navigate, and searching for and purchasing new titles on either the standard Kindle or Nook eReader is problematic.

The good news is that both companies now also produce tablet versions of their readers:  The Amazon line of Fire tablets and the Samsung Galaxy Tab for Barnes & Noble. Both use a version of the Google Talkback touch screen reader, which we described in depth in our mobile technology guide, and which you can use to not only read eBooks, but browse the Web, send e-mails, and much more.

The best news of all is that the Amazon Kindle app for Apple iOS and Google Android and the Barnes & Noble Nook apps for Apple iOS and Google Android are all extremely accessible. Via either of these apps, you can scan a book's Table of Contents, begin reading anywhere, and have your place saved automatically when you finish listening to the text being spoken aloud or sent to a portable braille display. You can also browse the Kindle and Nook eBook libraries from within the apps, and you can even look up the definition of unfamiliar words and highlight passages to re-read and share with friends.

Both Google and Apple have online bookstores where only eBooks are for sale. There are no “dead tree” editions available. Let’s discuss them one at a time.

The iBooks app is completely accessible using the built-in VoiceOver screen reader for Apple iOS or Mac computers. The only way to search, purchase, and download iBooks is through the app controls.

Books purchased from the Google Play Store will automatically open in the Play Books app, which comes installed on your Android smartphone or tablet as part of the operating system. Google Play books can also be read on a Mac or Windows computer, using a Web browser. The browser will open the book and provide button controls for page forward, page back, and other options.

Reading eBooks on a Portable Device

Each of the two main touch screen readers, VoiceOver and TalkBack, offer a suite of touch gestures that enable you to read and navigate text. If you are unfamiliar with these commands, check out the VoiceOver Gestures section and the TalkBack section of the mobile technology guide.

All of the apps and devices described above will allow you to create a virtual library containing as many books as you can store on your device. The selection is tremendous. Most new books are available in eBook format the day they are published in hardcover or paperback, or at most a few weeks later. You can nearly always download a free sample chapter to whet your interest.  Each of the eBook platforms we have described also offer daily deals and books available for free either as an ongoing price or as part of a limited-time promotion.

Amazon and Barnes & Noble also offer eMagazines and eNewspapers. You can often download a free sample issue so you can decide if you wish to subscribe. This is particularly handy, since some magazine publishers still publish their e-editions in inaccessible formats, so you will definitely want to try before you buy.

Next » Turning the Printed Page into Machine-Readable Text
Share