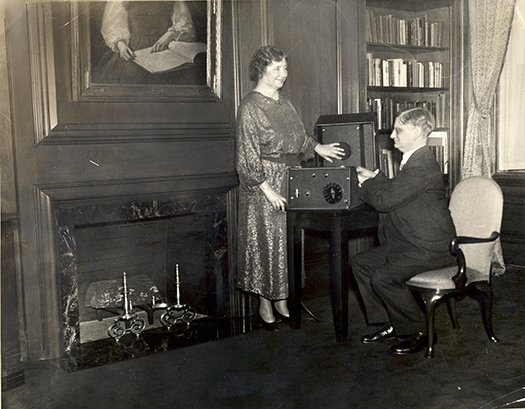 Image: Helen Keller with Robert Irwin, feeling the vibrations from the speaker of a Talking Book playback machine in the library of the American Foundation for the Blind, no date.

Welcome back to Inside the Helen Keller Digitization Project. Did you know that the American Foundation for the Blind was instrumental in creating the first Talking Book audio recordings? Mara Mills, Assistant Professor of Media, Culture, and Communication at New York University has written this fascinating piece on the history of Talking Books and Helen Keller’s central role in the project. Enjoy!

In 1930, Helen Keller stood before a Congressional committee to support the Pratt-Smoot Act, which established the Library of Congress program for circulating Braille materials. The director of the American Foundation for the Blind, Robert Irwin, was already concocting a plan to publish a new form of aural literature—Talking Books—as an adjunct to braille. He remarked in his memoir, "I have always dreamed of books on phonograph records ever since my first hearing of a squeaky Edison cylinder." By 1932, he had launched a Talking Book research program at the AFB, which resulted in the development of a gramophone record with closely-spaced microgrooves that could play eighteen minutes per side—about the maximum length of time a narrator could continuously read aloud without error. By comparison, commercial audiobooks and musical LPs would not become available to mainstream audiences until after World War II.

Keller was initially skeptical about Talking Books, believing the cost of the machines and records to be prohibitive. The AFB sold record players for $30-40, and few individuals or charities could afford them. When Irwin asked her to raise funds for the program in 1933, she replied via telegram, "Talking books a luxury the blind can go without for the present. With ten million people out of work am unwilling to solicit money for phonographs." By 1934, however, after the Pratt-Smoot law had been amended to fund Talking Books, Keller began soliciting radio stars like Will Rogers to promote the new technology. More importantly, she met with President Roosevelt in 1935 to lobby for Talking Book manufacture to become a WPA (work relief) project, employing blind workers. WPA support eventually resulted in the production and free loan of over 20,000 machines to blind people in the U.S.

Talking Books were recorded at the AFB and the American Printing House in Kentucky, and distributed via the Library of Congress. In 1938, the AFB produced a Talking Book titled The Story of the American Foundation for the Blind, which described the recording process. "More than a mechanical development," the narrator explained, Talking Books were at once "the most recent form in which an author’s words are reproduced," and reminiscent of "the days of the Middle Ages" when monks treated each of their illuminated texts as an individual work of art. In those early years of the program, before synthetic speech and convenient tools for speed-listening, many Talking Books included incidental music, sound effects, or dramatic ensemble narration.

Transcript of narration (Digitized with the support of NSF Award #135429):

Woman's voice: I can see that a great deal of work has gone into this new medium for bringing books to the blind.

Man's voice (maybe that of Alexander Scourby): Yes. And the Talking Book is something more than a mechanical development. As the most recent form in which an author’s words are reproduced, it boasts what even the majority of modern ink-print books lack, the individuality of a work of art. We like to think that it harks back to the days of the Middle Ages when monks expended on each volume to be engrossed and illuminated that special care and artistry which it required. Today, in our studios when plans are made to read a book onto the discs the Talking Book department fuses its efforts to send it out as a fresh and stimulating adventure in recording. The best professional readers are employed with a view to each reader’s suitability to the book about to be recorded; the volumes are studied to ascertain if they require special treatment, such as the translating of foreign phrases and the spelling of unfamiliar names, and in some cases incidental music and appropriate sound effects are added to enhance the atmosphere. This is done particularly in the recording of dramatic works acted by complete casts of players so that listening to them one’s armchair becomes a seat in a Broadway theater.

In the case of novels, Irwin invited authors to give oral introductions to their own books, which were then usually narrated by trained transcribers. He felt "the blind listener could gain some hint of the author’s personality through the tones, inflections and even from vocal mannerisms." Often these introductions provided information about the author’s life or writing practice. As a preface to the Talking Book version of Buddenbrooks, Thomas Mann told his blind readers, "An epic is for the ear more than for the eye. In early times it was said and sung, it was listened to—and, as a matter of fact, this book too was listened to before it was looked at, when the young author read it aloud as he wrote it, to relatives and friends." Reviewing the Talking Book program in 1944, journalist Fraser Bond commented, "It isn’t often that blind people have the edge on their seeing neighbors. Here is one instance in which they undoubtedly have. Many seeing book-lovers have often wondered how the author of a certain volume would read his own passages. The blind men and women of America do not need to wonder; they know. For them many famous writing folk read their own books aloud."

Keller, however, remained ambivalent about Talking Books. She could not hear them, and her dedication to Braille was such that she famously read until her fingers bled. In her Journal, 1936-1937, she recalled visiting the Talking Book studio of the American Braille Press in Paris and making a recording of her own:

"A film was made, showing a talking book and a record of what we said. First Mr. Cromwell and Mr. Raverat spoke into the record of the priceless boon those books are to blind persons who have not the sensitive touch required to learn braille, then I said my word of greeting, and Polly repeated for me the paragraph I had written this morning. Afterwards we listened to the record, and I noted how smoothly it ran until a discordant vibration arrested my attention. On inquiry I found it was my own voice, which did not surprise me—my fingers are never pleased with it when it is recorded."

Despite her ambivalence, Keller helped usher the audiobook medium into being. Her commitment to diverse modes of communication—the manual alphabet, lipreading, braille reading, talking gloves, tactile vibrations, and more—remains instructive today. New technologies proliferate, but they are often inaccessible, and support the same old forms of communication.

Be sure to track this blog by e-mail to be notified whenever new posts are added. You can also sign up for a free My AFB account to customize your alerts even further.