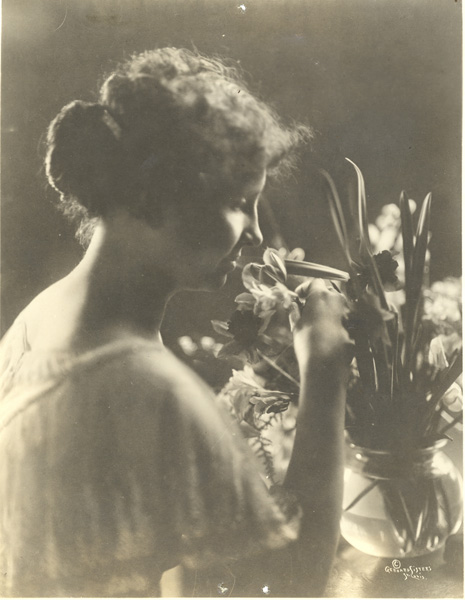 This is the fourth in our series of posts celebrating Helen Keller and the wonderful new avenues that are opening up for research about her life and legacy as a result of the Helen Keller Digitization Project. This week’s post is from Christopher Carlson, author, screenwriter and playwright. Enjoy!

I’m thrilled by the diligent work being done at American Foundation for the Blind to digitize its prodigious Helen Keller archive – so needed! We who revere the Keller legacy are grateful for this invaluable on-line service. That said, during the past several years I had the privilege of visiting AFB in New York and using the on-site library to conduct research while writing my full length Keller play, LITTLE ISLAND OF JOY.

The play takes place in 1916 when Helen was 36 years old and arguably the most famous woman in America: author of best-selling books and widely-read magazine articles; a highly paid national speaker; a radical socialist who spoke out forcefully against President Wilson’s plan for the United States to enter the war against Germany. Helen’s traveling secretary was Peter Fagan, a like-minded radical. One auspicious day, Peter communicated to Helen that he cared for her, deeply, which both surprised and delighted her. If only those closest to her — her beloved Teacher, Anne Sullivan Macy, and mother, Kate Keller — might have partaken in that same delight. Many years later, Helen wrote about this passionate, and secret, love affair, referring to it as "my little island of joy, surrounded by dark water."

These are the life events I explore in LITTLE ISLAND OF JOY. This year the play achieved 3rd Prize at the Beverly Hills Theater Guild-Julie Harris competition, and was a semi-finalist at the O’Neill Theater Center’s National Playwrights Conference. In addition, the Lighthouse Guild, an international agency dedicated to promoting and serving the interests of the visually impaired, will sponsor a full reading of the play in December for its annual fundraiser in New York City. Ultimately of course it’s my hope to find a stage where we can bring Helen’s enthralling character to life, not to mention her beloved and dedicated Teacher, Anne Macy.

My thanks to archivist Helen Selsdon for all the hard work she does at AFB to preserve Helen’s legacy, and from me particular thanks for the work done ‘back in the day’ — pre-digitization — when she gamely carried box after box from the stacks to this researcher’s desk. Those were the days, my friend. Now, thankfully, we can access the archive from wherever we happen to be. I’m also grateful that digitization will make AFB’s priceless historical resources available to everyone, including those who are blind or visually impaired. This is something we can all celebrate.