"Yours Is a Different Understanding of Architecture": Helen Keller’s House in Easton, Connecticut 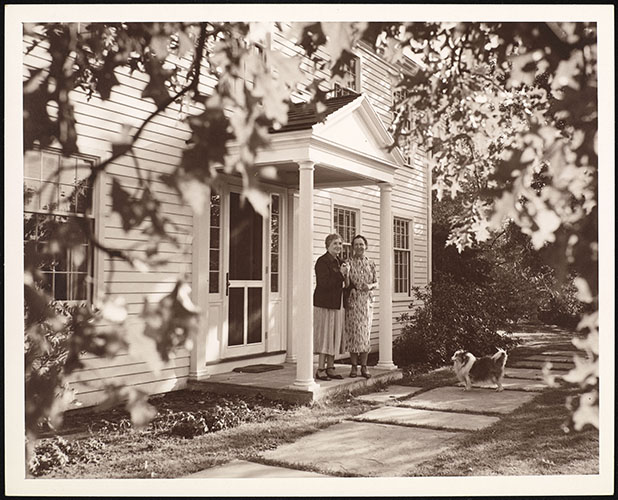 Image: Left to right, Helen Keller standing with Polly Thomson at the door to their home in Easton, Connecticut, circa 1955.

AFB is thrilled to publish the third in our series of posts focusing on newly digitized items in the Helen Keller Archival Collection. This week’s post is from historian David Serlin, an associate professor in the Department of Communication at the University of California-San Diego. Enormous thanks to David for contributing such a fascinating, thoughtful, and thought-provoking blog post.

In the late 1930s, Cameron Clark, the well-known regional architect, specially designed and constructed a house for Helen Keller and her friend and companion, Polly Thomson, on a parcel of land in Easton, Connecticut. Clark’s letter, dated 20 November 1939, is preserved at and digitized by the Helen Keller Archives at the American Foundation for the Blind, and is reproduced here. Although it was written as a "welcome" letter to Keller and Thomson following their move to Connecticut from their longtime residence in New York City in the fall of 1939, the letter also suggests the degree to which Clark and his colleagues endeavored to meet Keller’s multiple requirements—only a portion of which directly addressed her status as a homeowner with a disability.

For a person with a visual impairment, the necessity of having a living environment with predictable physical features and interiors is imperative. One can memorize the flow of interior walls and doorjambs, or the point where a kitchen counter stops and a refrigerator door begins, or the location of a stair banister in a narrow hallway. Interior decoration—how a library or living room might be arranged—becomes equally vital to physical comfort and security. “Yours is a different understanding of architecture than that of my other clients,” Clark wrote, suggesting that Keller’s subjective needs were also a key to her understanding of space in general. Furthermore, Keller’s senses of touch and smell were essential components of her domestic experience, not unlike the way she used her multiple senses to navigate cities such as New York and Paris, accounts of which feature prominently in her books and journalism, as well as in her personal diaries. The house’s emphasis on natural light and fresh air—the warmth and light of the sun felt through large windows, the physical intimacy of relaxing on a small terrace—were more than luxurious amenities for Keller.

To this end, these domestic features reflected other aspects of Keller’s aesthetic sensibility, since in many circles she was a well-known taste maker and figure of fashion. “The house has many of the features of the old Colonial houses,” Clark wrote reassuringly, “which have been adapted to modern requirements.” Clark was proud to have combined the house’s Colonial Revival style—columns, gabled roof, symmetrical “wings” emanating from a central hall—with modern conveniences such as central heating and a washing machine. Clark also boasted of the house’s ability to maintain the "character and harmony with the other houses nearby, and…the contours of the land." Clark was not being merely descriptive here. Indeed, Clark used the letter to take a jab at Modern architecture, then widely in vogue. “There are houses of other types," Clark asserts, "but many of us in Connecticut feel that harmony is to be preferred to more individualistic and extreme design."

One imagines Clark bristling at the designs of contemporary European architects like Walter Gropius and Le Corbusier or Americans like Philip Johnson. Yet Clark’s distaste for the rectilinear glass and steel boxes of Gropius and Johnson must be put into perspective. During the Depression Era, architecture with a regional or historical flavor was enormously popular. In fact, Art Deco skyscrapers along with streamlined trains and Zeppelins thought to symbolize the “Machine Age” of the 1930s were in the minority compared to sites like Colonial Williamsburg in Virginia or the Henry Ford Village in Dearborn, Michigan, all products of the early twentieth-century’s fascination with colonial Americana. In this sense, one could say that Keller was very much a product of her time. She was able to find an architect sympathetic to her particular impairments as well as an ally who could help meet her desire for modern country living.

In the fall of 1946, while Keller and Thomson were traveling abroad, a fire destroyed their house, as well as a large amount of written manuscripts and personal effects. Miraculously, one of the few items to survive the devastating fire was Clark’s letter. Keller’s house was rebuilt based on the original plans. This second house, at 163 Redding Road in Easton, bears the plaque of the National Register of Historic Places, and stands amidst a conglomeration of similarly landmarked buildings in Easton’s Aspetuck Historic District. The house, like Clark’s letter, is a testament to architectural empathy as well as to the precarious legacy of archival documents.